A new study led by Brown University finds that cracks in brittle perovskite films can be easily healed with compression or mild heating, a good sign for the use of perovskites in next-generation solar cells. 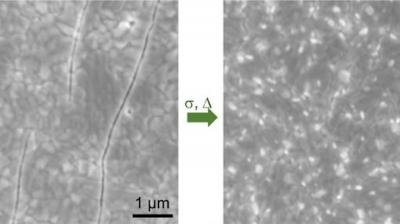 A cracked perovskite film (left) can be fully healed (right) with some compression of a little heat. Credit: Padture Lab/Brown University

'The efficiency of perovskite solar cells has grown very quickly and now rivals silicon in laboratory cells,' said Nitin Padture, a professor in Brown's School of Engineering and director of the Institute for Molecular and Nanoscale Innovation. 'Everybody's chasing high efficiency, which is important, but we also need to be thinking about things like long-term durability and mechanical reliability if we're going to bring this solar cell technology to the market. That's what this research was about.'

'In material science, things that are easy to make also tend to be easy to break,' said Padture who led the study. 'That's certainly true of perovskites, which are quite brittle. But here we show they're also quite easy to fix ' cracks in perovskite films can be healed by compressing them or with moderate heat.'

For the study, Srinivas Yadavalli, a doctoral student working in Padture's laboratory and the first author of the paper, deposited perovskite films on plastic substrates. He then bent the substrate to put tensile (pulling apart) stress on the perovskite film while using a scanning electron microscope (SEM) to detect cracks. Once the film was cracked, the researchers then bent the substrate in the opposite direction to see if compressive stress might heal those cracks.

SEM imaging showed that the cracks had disappeared. To make sure the cracks were fully healed and not merely hidden, the researchers used a technique known as X-ray diffraction. By measuring the size of a material's atomic lattice, the technique can reveal whether a formerly cracked area is now able to carry a mechanical load ' a surefire sign that the crack is healed. Those tests also indicated fully healed cracks.

The researchers found that heat was just as effective in healing cracks. Temperatures around 100 degrees Celsius ' quite modest heating by material science standards ' were enough to completely heal cracks in perovskite films.

Padture says that the research was aimed at better understanding the basic properties of perovskite materials, and more work needs be done to develop methods of applying this information in a commercial setting. But knowing that perovskite films are easily healed could be useful as these kinds of solar cells move toward commercialization.

'It's good news,' Padture said. 'It suggests that fairly simple healing methods may help maintain performance in these kinds of solar cells.'