Researchers at Huazhong University of Science and Technology (HUST) in China, University of Toledo in the U.S, Monash University in Australia, Jilin University and Tsinghua University in China, the Dalian Institute in China and the University of Toronto in Canada have examined a lead-free double perovskite that exhibited stable and efficient white light emission. In its mechanism of action, the material produced self-trapped excitons (STEs) due to Jahn-Teller distortion of the AgCl6 octahedron in the excited state of the complex, observed when investigating exciton-phonon coupling in the crystal lattice. 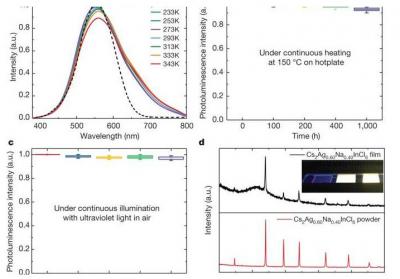 The research team stated that a fifth of global electricity consumption is based on lighting, and efficient and stable white-light emission with single materials is ideal for such applications. Photon emission that covers the entire visible spectrum is, however, difficult to attain with a single material. Metal halide perovskites, for instance, have outstanding emission properties but contain lead, and so yield unsatisfactory stability. The perovskite in this study is, therefore, lead-free.

White light emission from a single emitter layer is of interest in lighting applications due to its simplicity compared to multiple emitters. Typically, broadband and white light emissions originate from self-trapped excitons (STEs) existing in semiconductors with localized carriers and a soft lattice. The authors of this study focused on the double perovskite Cs2AgInCl6 as a promising material that emits warm white light due to its broad spectrum and all-inorganic, lead-free nature.

The study optimized the alloy to form Cs2(Ag0.6Na0.4)InCl6 with a small percentage of bismuth doping to emit warm white light with increased quantum efficiency for more than 1000 hours. Materials for lighting applications can be defined as those emitting a "warm" white light for indoor applications and "cold" white light that approximates the visible region of the solar spectrum. In the study, the team first sought to understand the origins of broadband emissions in Cs2AgInCl6 using mathematical modeling and computational studies to relax the lattice and represent self-trapped excitons (STEs) to investigate exciton-phonon coupling. Such systems will be fundamental to engineer the next generation of energy-efficient and cost-effective lighting and display technologies.

A self-trapped exciton (STE) is defined as a bound electron-hole pair carrier that can dramatically enhance luminescence, energy transport and lattice defect formation in the crystal. The researchers found that STEs in the double perovskite arose from strong Jahn-Teller distortion of the integral AgCl6 octahedron complex. The trapped excitons had a similar orbital character to the free exciton, indicating parity-forbidden transition (arising due to disruption of the center of symmetry). The theoretical analysis showed an extremely low photoluminescence quantum yield (PLQY) for pure Cs2AgInCl6. To enhance the PLQY for practical applications as broadband materials, the system had to be modified, specifically by breaking parity-forbidden transition to manipulate the symmetry of the STE wavefunction.

A practical approach to achieve this was via partial substitution of Ag with an element that could sustain the double perovskite structure. The substitute required a distinctively different electronic configuration to Ag, such as a group-IA element or alkali metal. The scientists therefore explored alloying Na into Cs2AgInCl6 to form pure Cs2NaInCl6, which demonstrated broadband emission on substitution but with very low efficiency due to strong phonon emission, requiring optimization of the Na content in the complex.

Since lattice mismatch between the two perovskites was very low, the scientists anticipated Na+ incorporation would occur without detrimental defects or phase separation. For the synthesis, CsCl, NaCl, AgCl and InCl3 precursors were mixed into an HCl solution in a hydrothermal autoclave. The mixture was heated for a defined period of time and cooled down to result in a final white precipitate product (90% yield). The pure double perovskite phase was confirmed using X-ray diffraction patterns (XRD) of a series of product compositions. The results agreed with plasma optical emission spectrometry (ICP-OES). The results were also in agreement with similar alloying experiments that were previously conducted with lithium (Li). The study thus suggested a general trend for alkali-metal-induced photoluminescent enhancement in double perovskites.

Photoluminescence spectra were recorded for a series of product powders by varying the temperature of the measurements. The authors optimized the Na content alongside bismuth (Bi3+) doping to improve the crystal quality and slow cooling to obtain the highest PLQY (85 Â± 5%) recorded thus far for white-light-emitting materials to form the optimally alloyed Cs2Ag0.6Na0.4InCl6 in the study.

Photoluminescence excitation (PLE) spectra confirmed STE origin of the white emission to experimentally confirm the calculated time-scale of exciton self-trapping. The Na perovskite exhibited linear dependence on the photoexcitation power. Additional theoretical tests were done to understand how PLQY varied as a function of the Na content.

A key challenge for lighting applications is the parameter of emission stability. The produced perovskite showed stable emission in the study with little emission degradation. When the powder was annealed to a hotplate, only minimal photoluminescence decay of the white emission was observed, the authors proposed that the observations may be due to strongly bound excitons and a nearly defect-free lattice that prevented photoluminescence quenching while resisting thermal stress.

The scientists then developed a white light emitting diode (LED) by directly pressing the Na perovskite powders on to a commercial ultraviolet LED chip, without epoxy or silica encapsulation for protection. With the contribution from the blue light of the UV LED chip the device demonstrated a color temperature of 4,054 K to fulfill requirements for indoor lighting. When the white LED was operated for more than 1000 hour in air, negligible degradation was observed. The outstanding photometric performance combined with easy manufacture indicated promise for white-phosphor lighting applications.

In this way, the scientists presented a new strategy to produce broadband emission associated with the STEs for single-material based white-light electroluminescence, allowing prototype double-perovskite based electroluminescence device formation. To increase electroluminescence performance in the future, further research should focus on optimizing the emitting-layer quality of the Cs2Ag0.6Na0.4InCl6 films.