Researchers from Zhejiang University, the Beijing Institute of Technology and Nanjing Tech University in China, Argonne National Laboratory in the U.S, University of Cambridge in the UK have combined perovskite nanoparticles with 2D perovskites to double the efficiency of blue LEDs. 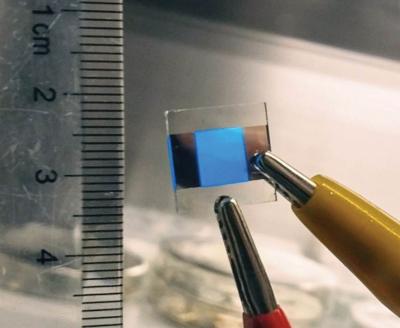 While the device only glows for a few minutes, the work is still considered 'a big step toward the development of high-performance blue perovskite emitters' says Jianjun Tian of the University of Science and Technology in Beijing, who was not involved in the work. 'The efficiency of these blue perovskite LEDs is already higher than that of the commercially available blue organic LEDs.'

The team stated that since researchers reported the first perovskite LED five years ago, the efficiency of red and green devices has increased from 1% to over 20%. But the blue ones have been a different story, and getting efficient blue emission has troubled all LED technologies.

The physics of how LEDs work contributes to the struggles with blue devices. Applying an electric potential to LED materials excites their electrons, and when those excited electrons fall from a high energy level to a lower one, light gets emitted. The gap between these levels, also called the bandgap, dictates the color of the light. To produce blue light, that bandgap needs to be very large. But materials with large bandgaps usually have more defects that trap electrons, blocking light emission and dragging down efficiency.

Perovskites have their own blue-light issues. Researchers have typically made blue LEDs with metal halide perovskites by mixing bromide and chloride compounds and tuning their ratio. But the color slowly changes as the halides in the compound separate. Another promising approach is to use nano-sized bromide-based perovskites such as quantum dots, which are highly efficient at converting excited electrons to light. But scientists have struggled to get enough electrons into the tiny quantum dots, leading to dim emitters, says Yizheng Jin of Zhejiang University in China.

Jin and his colleagues addressed these issues by making films of lead bromide perovskite nanoparticles embedded in a matrix of 2D perovskite layers. The 2D perovskite has a large bandgap suitable for blue emission, but also electron-trapping defects. However, in the new films, nearly all of the excited electrons from the 2D perovskites pass into the nanoparticles, leading to blue emission at a wavelength of 483 nm. As a result, the efficiency of these blue LEDs is 9.5%. Commercial blue organic LEDs have an efficiency of about 5%.

This approach is important progress, but there is still a long way to go before blue perovskite LEDs can be practical, says Qihua Xiong, a physicist and electrical engineer at Nanyang Technical University. The light emission needs to be much brighter, and the devices should be much more stable, he says.

Right now, the devices have a brightness of 100 candelas per square meter; computer monitors and TV screens require at least 300. And the LED's efficiency drops by half after shining for only four minutes. The short lifetime of perovskite LEDs is one of the most challenging hurdles to commercialization, Jin says. 'Even for the most efficient green and red devices, the lifetime is limited to less than 200 hours,' he says. Commercial LEDs need to last 10 or more times longer.

Jin and his colleagues plan to investigate the mechanisms behind efficiency loss and experiment with different material chemistries and nanostructures to increase efficiency and lifetime.