Researchers from Ulsan National Institute of Science and Technology (UNIST) have designed a photoelectrochemical cell for hydrogen production utilizing a high-performance organic–inorganic halide perovskite as a panchromatic absorber. The cell achieved a record high photocurrent density of 19.8 mA cm−2. 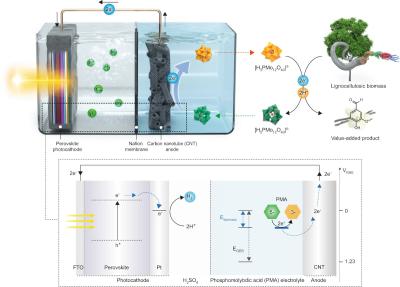 Photocatalysts are a key component of solar hydrogen production, but the low-level commercialization of these technologies is in part due to the photocatalysts used (and available at an economically feasible price). Many photocatalysts used to date have a low performance. Conventional inorganic photocatalysts, such as TiO2, WO3 and BiVO4, are low-cost and remain stable for long times, but they have large electronic bandgaps and poor optoelectronic properties.

These two properties mean that more energy needs to be put into the device to overcome the large bandgap, and it limits the use of solar flux—and often requires a large external bias that deteriorates the solar-to-hydrogen (STH) efficiency to well below the levels deemed feasible for commercialization.

It’s thought that lead halide perovskite materials could offer a number of advantages over traditional photocatalysts. These perovskites have tunable bandgaps and energy levels alongside a high absorption coefficient and excellent charge transport properties. These properties have already enabled several perovskite materials to become leading materials for the next generation of photovoltaic systems, and it’s thought they could offer similar advantages for solar hydrogen productions as well—but there have so far only been a few studies that have looked at perovskite-based photoelectrodes for solar hydrogen production, and none of the reports to date have been utilized alongside biomass as the electrons source.

In their recent work, the researchers tried to address some of the challenges with existing solar hydrogen production methods by looking at both low bandgap lead halide photocathodes as a panchromatic absorber and lignocellulosic biomass and source of electrons. The photo-electrochemical cell produced a record high photocurrent density of 19.8 mA cm-2 and also produced some valuable by-products—in the form of vanillin and acetovanillone—that could be used to add commercial value in indirect ways.

The high solar productivity, alongside a near-unity faradaic efficiency for hydrogen generation, was achieved by the researchers without any additional bias, nor were there any oxygen emissions causing trouble. Compared to water, the oxidative half-reaction for biomass had a much lower potential, and the perovskite photocathode was able to harvest the entire visible light spectrum as well.

Solid biomass was successful during this approach because the electrons were extracted using phosphomolybdic acid (PMA) as a catalyst and an electron/proton mediator. The PMA selectively depolymerizes the lignin within the biomass, extracting and storing its electrons in the process while leaving the other components of lignocellulose (cellulose and hemicellulose) intact. This approach enables a range of different biomass forms to be used to produce solar hydrogen, including insoluble solid biomasses (such as lignin and lignocellulose) that are not typically usable in direct electrochemical oxidation reactions. The PMA reaction is also responsible for generating value-added chemical by-products.

The reduced PMA can also be reoxidized at a low potential, so PMA-enhanced biomass has the potential to replace the water in solar hydrogen production systems. The production system utilized by the researchers operated and remained stable for over 20 hours without degradation. The perovskite electrode was able to utilize the solar flux more effectively, opening the door to newer and different strategies for tackling the current issues with solar hydrogen production.