Researchers from ITMO's School of Physics and Engineering have created a paste, made of titanium dioxide and resonant silicon nanoparticles, meant to increase the generation of photocurrent in perovskite solar cells and maximize their efficiency. 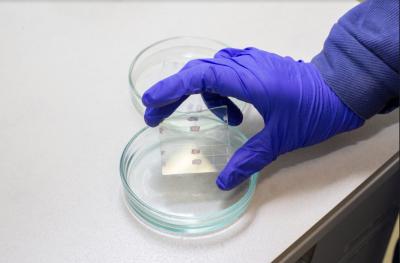 One of two strategies is usually used to further boost the efficiency of PSCs: improving the charge collection or increasing light absorption by the charge generating layer. The first strategy also means the need to introduce other substances or 2D structures into perovskites, which makes the resulting devices more expensive. The ITMO team, together with colleagues from Tor Vergata University, went around this problem by using Mie-resonant silicon nanoparticles, as silicon is one of the elements most accessible in nature.

They used colloid chemistry methods to create a silicon-based nanoparticle paste to precisely control the light scattering inside a perovskite solar cell. This solution made it possible to increase the generation of photo-induced current in the perovskite structure and reach the efficiency maximum of solar cells based on the simplest perovskite composition.

'We have improved the titanium paste that is needed to selectively collect electrons in perovskite cells. We add resonant nanoparticles to the electron transport paste in a chosen concentration in the process of solar cells' production. This way, the preparation process doesn't get more complicated ' and it helps that silicon particles are cheap, too,' explains Aleksandra Furasova, first author of the paper and a junior research associate at ITMO's School of Physics and Engineering. 'We have also analyzed the effect of the spatial location of the nanoparticles on the direction of light propagation and changed their concentration in the paste, so that all the incident light is focused on the perovskite. This directly affects the efficiency of converting light into electricity, as well as all main photovoltaic parameters. Using multi-physical calculations, we identified the optimal nanoparticle concentration and developed an ideal paste to create the electron transport layer that helped us reach nearly maximal efficiency for this type of solar cell.'

According to the researchers, it was important to optimize the spatial location of silicon nanoparticles in the considered devices. To do that, they provided numerical calculations that accounted for electrophysical and optical properties of all layers and nanoparticles when they are subjected to external radiation and voltage. These calculations allowed them to determine how the size of and distance between resonant nanoparticles affects the optical and electrophysical properties of the whole structure.

'In this project, we applied the spin coating method, meaning that we get thin homogeneous films as liquids deposit on the flat substrates, but other methods can also be used to scale the technology. The resulting paste is a multipurpose product that can be used in production of other kinds of perovskite solar cells, as well as for photodetectors and other perovskite-based optoelectronic devices. We believe that this solution will be in demand,' comments Sergey Makarov, professor at ITMO's School of Physics and Engineering.