An international group of researchers from Swansea University, Indian Institute of Technology, University of Jammu, CSIR and Khalifa University of Science and Technology recently examined how down-conversion (DC) materials could be used to improve the performance of solar cells based on perovskite materials. The team reported that such materials could result in an electric yield enlargement by converting ultraviolet (UV) light to visible, while also providing UV shielding. 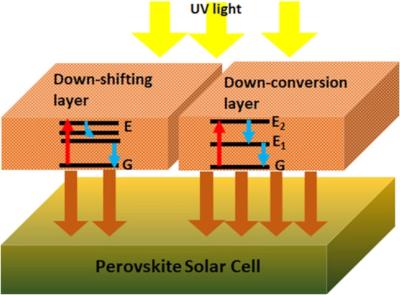 “The DC materials can absorb the high-energy photon (300–500 nm) and re-emit a longer-wavelength photon to which the photovoltaic (PV) device is more sensitive,” the team said. “Various types of DC materials have been investigated for this purpose like quantum dots (QDs), oxides, luminescent glasses, lanthanides, and organic dyes.”

They have found that such materials should be used to overcome the poor blue response of solar cells, while absorbing short-wavelength light, typically in the 300 nm to 500 nm range, and re-emit it at a longer wavelength. They focused on lanthanide and non-lanthanide DC materials.

“Photoluminescence is an attractive property of lanthanides and exhibits sharp emission peaks with high color purity,” the researchers explained.

They said that this luminescence is the outcome of the radiative and nonradiative transition of an electronically excited ion. Lanthanides are commonly used as alloys to impart strength and hardness to metals.

The DC materials could be easily doped in the charge transport or perovskite photoactive layer in order to be used to improve perovskite cells, the scientists said. They should have dual-functional properties to facilitate charge carrier transport.

“This review may allow researchers working on the PSCs to develop more photostable devices and consequently help in future commercialization in an increasingly green energy market,” the scientists said. “Future focus will also be on utilizing the whole incoming spectrum from IR to UV in photovoltaic devices.”