Researchers from Singapore's Nanyang Technological University have examined how thermal evaporation (TE) could be used to fabricate mini perovskite solar modules. TE are mature techniques that are commonly used in the microelectronic and optoelectronic industries to produce organic light-emitting diodes (OLEDs), metal contacts, and various coatings. 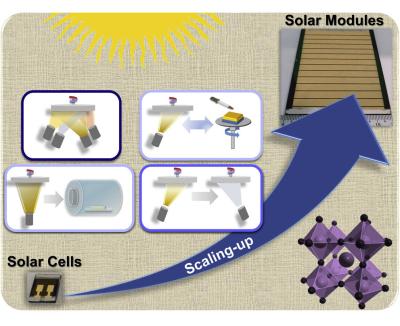 The research team analyzed the use of several evaporation-based techniques to fabricate halide perovskite thin films, from the relatively simple single-source deposition and multi-source co-evaporation to the more complex multistep evaporation and hybrids of thermal evaporation with gas reaction and solution processing. The team explained that this combined approach exploits the advantages of both methods, but also has some limitations, such as increased complexity and the use of solvents.

The team stated that it believes that thermal evaporation is the ideal perovskite deposition method to make that jump rapidly, since it is easily scalable, free from hazardous solvents, and already well-integrated into current opto- and microelectronics production lines.

The researchers said one of the main issues with co-evaporation is the need for extensive optimization of the deposition parameters for perovskites with complex stoichiometries, especially when more than two or three precursors are evaporated at the same time. They also noted how long deposition time could present a barrier for commercial production, as most studies of these techniques tend to neglect this issue.

“It would be desirable to produce not only evaporated perovskite films but also fully evaporated modules using the same fabrication lines,” the research group said.

“The entire process can be automated and controlled, making it intrinsically attractive for large-scale and high-throughput manufacturing,” the scientists said.

The team believes that the future of research in this field should look in new optimal device interlayers to improve the quality of the active material and the transparency,  passivating defects by vacuum-based techniques, and boosting operational stability in order to maximize and realize the full potential of thermally evaporated perovskite solar devices.