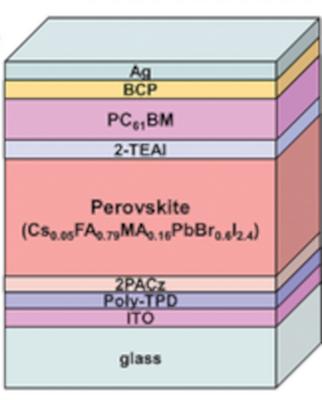 “These modulators can affect the surface energy of the perovskite films,” the team explained. They explained that the two compounds can dramatically reduce non-radiative interfacial recombination. This can have a significant impact on electrical performance in perovskite cells, with implications for open-circuit voltage, short-circuit current, fill factor, and ultimately, power conversion efficiency. They reported that “2-TEAI showed a stronger interaction than HO-PEAI, forming a quasi-2D structure on the perovskite surface without further annealing.”

The researchers built the p-i-n structured cell with poly-TPD coated indium tin oxide (ITO) substrate, a hole transport layer made of carbazole (2PACz), the perovskite layer, the 2-TEAI modulator, an electron acceptor made of phenyl-C61-butyric acid methyl ester (PCBM), a bathocuproine (BCP) buffer layer, and a silver (Ag) metal contact. The salts were deposited onto the surface of perovskite films through a facile spin-coating process without annealing.

Through different measurements, the research team found that the surface modulator does not alter the absorption spectra of perovskite films.

“The 2-TEAI induces a deeper valence band edge, which is expected to provide a stronger hole-blocking effect at the perovskite/PCBM interface and thus is more beneficial for reducing the interfacial recombination,” the scientists said. “Based on these results, we believe the 2-TEAI would enhance the open-circuit voltage of manufactured perovskite solar cells.”

“The findings suggest that the role of the modulator is more than surface passivation,” the scientists concluded. “Our study will provide insight into the selection and molecular design of post-treatment materials for highly efficient and stable perovskite solar cells.”