The U.S. Department of Energy (DoE) recently announced $20 million in funding to advance perovskite photovoltaic technologies. To be competitive in the marketplace, perovskite's long-term durability must be tested and verified, which is the aim of this funding opportunity through DOE's Office of Energy Efficiency and Renewable Energy (EERE).

'Perovskites are a promising solar technology that could help us reach the next level of innovative and efficient solar power,' said Deputy Secretary of Energy Mark W. Menezes. 'Our goal is to further advance this technology here in the United States. The research and development supported by this $20 million investment will help us better understand how perovskite solar cells, which can be manufactured quickly, can further this mission.' 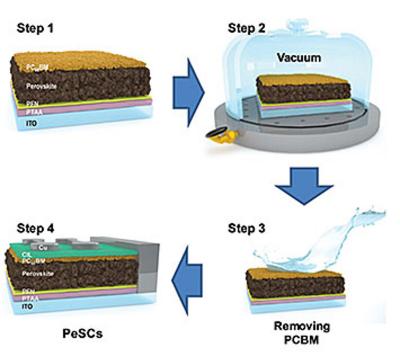 A schematic showing the vacuum and solvent process for removing the ionic defects that reduce the performance of hybrid perovskite solar cells.

Typically, thin-film devices are made in solution by sandwiching the active light-absorbing material in between top and bottom metal electrical contacts (electrodes) and organic semiconductor interlayers, which enhance the extraction of electrical currents to the contacts. In this case, before putting the final electrode on top, the scientists put the device in vacuum. In prior experiments, the team had noticed that removing and then redepositing the top electrode and interlayer reduced burn-in loss, a rapid decrease in efficiency at the beginning of light illumination. They subsequently confirmed that the high-vacuum environment used to deposit the electrode had contributed to this reduction. During vacuum curing, loose ions emerge from the perovskite and concentrate at the top interlayer. In a second processing step, the scientists used a chemical solvent to selectively wash away this top layer.

The U.S. Department of Energy's (DOE's) National Renewable Energy Laboratory (NREL) has established a public-private consortium called the US-MAP for US Manufacturing of Advanced Perovskites Consortium, that aims to fast track the development of low-cost perovskite solar cells for the global marketplace.

The joint effort will aim at resolving a number of issues involving manufacturing and durability. US-MAP will also tackle sustainability issues, some of which relate to the use of lead and other metals.

Researchers at Northern Illinois University and the U.S. Department of Energy's (DOE) National Renewable Energy Laboratory (NREL) in Colorado have reported on a potential breakthrough in the development of hybrid perovskite solar cells.

Led by Tao Xu of NIU and Kai Zhu of NREL, the scientists have developed a technique to sequester the lead used to make perovskite solar cells and minimize potential toxic leakage by applying lead-absorbing films to the front and back of the solar cell.

The US Department of Energy (DOE) will allocate up to USD$125.5 million in financing for research and development (R&D) projects in the solar field. The research will target reducing the cost of solar technology, which in turn will enhance the competitiveness of the domestic photovoltaic (PV) production and improve the grid reliability.

Among other projects, the DOE funds will see USD$15 million go to 8-12 projects that aim to prolong the lifespan of PV systems and cut hardware costs for plants using traditional silicon solar cells, as well as thin-film, tandem and perovskite cells.

Researchers at the Department of Energy's SLAC National Accelerator Laboratory and Stanford University have created a nickel oxide material that shows signs of superconductivity.

Also known as a nickelate, it's the first in a potential new family of unconventional superconductors that's very similar to the copper oxides, or cuprates, whose discovery in 1986 raised hopes that superconductors could someday operate at close to room temperature and revolutionize electronic devices, power transmission and other technologies. Those similarities make scientists wonder if nickelates could also superconduct at relatively high temperatures.

The U.S. Department of Energy (DOE) announced funding of up to $130 million for new research to advance early-stage solar technologies.

An international team of researchers led by the U.S. Department of Energy's SLAC National Accelerator Laboratory (that also included, among others, researchers from NIST, the University of Bath, Kings College London and Yonsei University) has gained new understanding of the movement of atoms in perovskite materials and how it affects the functioning of those materials. The results could explain why perovskite solar cells are so efficient and aid the quest to design hot-carrier solar cells, a theorized technology that would almost double the efficiency limits of conventional solar cells by converting more sunlight into usable electrical energy. 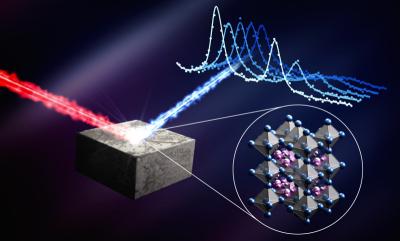 Common materials that make up conventional solar cells display a nearly rigid arrangement of atoms with little movement. In hybrid perovskites, however, the arrangements are more flexible and atoms move around more freely, an effect that impacts the performance of the solar cells but has been difficult to measure.

Ascent Solar Technologies, a manufacturer of flexible thin-film photovoltaic (PV) solutions, has been selected by the US Department of Energy (DOE), supported by the Office of Technology Transitions (OTT) Technology Commercialization Fund (TCF), for two exclusive development projects.

As part of the awards, worth up to $100,000 each, Ascent Solar is to work towards commercialization of sputtered Zn(O,S) buffers in flexible CIGS solar cells and also development of next-generation, high-efficiency Perovskite/CIGS tandem cell. These projects are part of Ascent Solar's plans for next-generation lightweight and flexible solar cells.

In a work supported by the Department of Energy (DOE) and Office of Science, Basic Energy Sciences (BES), researchers from Stanford, University Pennsylvania, SLAC National Accelerator Lab, Columbia University, Carnegie Institute for Science in Washington and Weizmann Institute of Science in Israel, have shown how atoms in perovskites respond to light and could explain the high efficiency of these perovskite-based solar cells.

The team explains that sunlight causes large changes to the underlying network of atoms that make up perovskites. Before being hit with light, six iodine atoms rest around a lead atom. Within 10 trillionths of a second after being hit with light, the iodine atoms whirl around each lead atom. These first atomic steps distort the structure and result in significant changes. Furthermore, the atoms' motions alters the way electricity flows and may help explain the efficiency of perovskites in solar cells.