Perovskite-Info is a news hub and knowledge center born out of keen interest in the wide range of perovskite materials.

Scientists at Rice University, INSA Rennes, SLAC National Accelerator Laboratory and Northwestern University have managed to directly visualize the structural dynamics in monocrystalline 2D perovskites. While researchers already knew the atoms in perovskites react to light, direct visualization of these reactions is considered a long-standing challenge. Now, it's been made possible to see precisely how those atoms move.

The team's study details the first direct measurement of structural dynamics under light-induced excitation in 2D perovskites. “The next frontier in light-to-energy conversion devices is harvesting hot carriers,” said Rice University’s Aditya Mohite, a corresponding author of the study. “Studies have shown that hot carriers in perovskite can live up to 10-100 times longer than in classical semiconductors. However, the mechanisms and design principles for the energy transfer and how they interact with the lattice are not understood.”

The US Department of Energy (DOE) recently announced up to $47 million in funding (DE-FOA-0002920) to accelerate the research, development, and demonstration (RD&D) of affordable clean hydrogen technologies.

This funding opportunity focuses on RD&D of key hydrogen delivery and storage technologies as well as affordable and durable fuel cell technologies. The RD&D projects will focus particularly on applications for heavy-duty trucks, to reduce carbon dioxide emissions and eliminate tailpipe emissions that are harmful to local air quality. Among the specific topics to be funded in this interest area is perovskite-based catalysts, under the headline of "Hydrogen Carrier Development".

Researchers from the US Department of Energy’s National Renewable Energy Laboratory (NREL), University of North Texas and University of Oklahoma have demonstrated that an ultrathin layer of  silicon oxide layer can harden perovskite photovoltaics to protect it from critical stressors in space and on Earth.

Space has its own unique environmental challenges for solar cells, perovskite ones included. PSCs have to be resilient against such challenges as “radiation, atomic oxygen, vacuum, and high-temperature operation,” according to the study’s abstract.

An international research group that included teams from Vrije Universiteit Amsterdam, University of Fribourg, the University of the Basque Country and the University of New South Wales has assessed the levels of efficiency and stability that perovskite solar cells (PSCs) have to achieve in order to become an economically viable technology to compete with crystalline silicon cells in the rooftop segment. 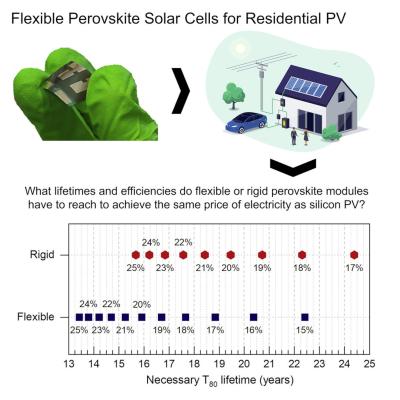 The scientists assessed the necessary lifetime (LT) of a perovskite module, which they defined as the time until a module has 80% of its initial efficiency, as a function of efficiencies to be competitive in the levelized cost of electricity (LCOE). They found that perovskite solar modules might need to provide 20% efficiency for at least 36 years, or 25% efficiency for a minimum of 21 years, if they want to compete with conventional PV panels.

Researchers from the UK's University of Birmingham, in collaboration with China's University of Science & Technology Beijing, have used perovskite materials to design a novel adaptation for existing iron and steel furnaces that could reduce carbon dioxide (CO2) emissions from the steelmaking industry by nearly 90%.

This radical reduction is achieved through a 'closed loop' carbon recycling system, which could replace 90% of the coke typically used in current blast furnace-basic oxygen furnace systems and produces oxygen as a biproduct.

The team unveiled the interfacial dynamics of solid-solid (between halide perovskite molecules) and solid-liquid (between a halide perovskite and an electrolyte) interfaces during photoelectrochemical hydrogen production. The latest findings open up an avenue to develop a more efficient solar-driven method for producing hydrogen fuel in the future.

Researchers at the Research Institute of Sweden (RISE) and KTH Royal Institute of Technology have presented the ionic liquid (IL) synthesis of two novel pseudo-2D perovskite-type gold(III)polyiodide compounds and their use as active layers in monolithic solar cells. 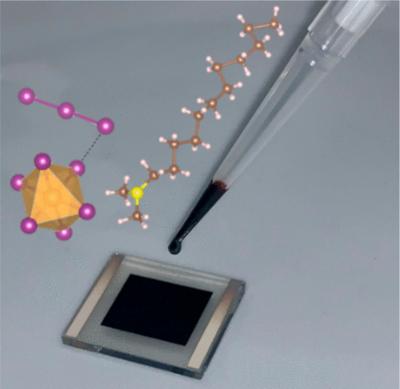 The team stated that its recent work represents the first demonstration of film deposition of gold iodide/polyiodide compounds onto porous monolithic substrates with subsequent solar cell characterization. The devices reportedly showed promising photovoltaic performance and could unlock new materials design possibilities, ultimately moving away from lead-based photovoltaic materials. These findings further highlight the use of simple polyiodide entities to increase the structural and electronic dimensionality of gold perovskite-type anions.