Perovskites are materials that share a crystal structure similar to the mineral called perovskite, which consists of calcium titanium oxide (CaTiO3).

Depending on which atoms/molecules are used in the structure, perovskites can possess an impressive array of interesting properties including superconductivity, ferroelectricity, charge ordering, spin dependent transport and much more. Perovskites therefore hold exciting opportunities for physicists, chemists and material scientists. 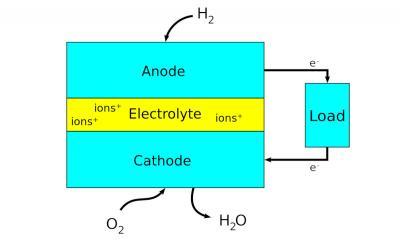 Fuel cells are electrochemical energy conversion devices that produce electricity via chemical reaction. They convert potential chemical energy into electrical energy and generate heat as a by-product. A major advantage of fuel cells is that they are “green” - they generate electricity with very little pollution, as much of the hydrogen and oxygen used in generating electricity ultimately combine to form a harmless byproduct - water.

Fuel cells can be used in a wide range of applications, including transportation, material handling, stationary, portable, and emergency backup power applications. Fuel cells have several benefits over conventional combustion-based technologies currently used in many power plants and passenger vehicles; they can operate at higher efficiencies than combustion engines, and can convert the chemical energy in the fuel to electrical energy with efficiencies of up to 60%. Fuel cells have lower emissions than combustion engines. Hydrogen fuel cells emit only water, so there are no carbon dioxide emissions and negative impact on the environment.

It appears that designing inexpensive, efficient, reliable fuel cells is not such a simple affair.
Scientists have designed many different types and sizes of fuel cells in their search for greater efficiency. A major point is the choice of electrolyte. The design of electrodes, for example, and the materials used to make them, heavily depend on the used electrolyte.

The type of fuel also depends on the electrolyte. Some cells need pure hydrogen, and therefore demand extra equipment such as a "reformer" to purify the fuel. Other cells can tolerate some impurities, but might need higher temperatures to run efficiently. Liquid electrolytes circulate in some cells, which requires pumps. The type of electrolyte also dictates a cell's operating temperature.

Each type of fuel cell has advantages and drawbacks compared to the others, and none of them is currently cheap and efficient enough to widely replace traditional ways of generating power.

Perovskites have been studied for various parts of fuel cells. Components like electrolytes, electrodes and interconnects, have all been targeted as potential beneficiaries of perovskite materials. In SOFCs (solid oxide fuel cells), for example, all components (except for the sealant) can potentially be made of perovskite ceramics. In recent years, a significant amount of time has been invested researching the development of perovskite materials for fuel cells, identifying new mixed conductors and improving the operational performance of existing materials through development of improved cell designs. Hopefully perovskites will be able to improve fuel cell technology so it can be put into widespread use.

Researchers from Japan's Tsukuba University have found that ultraviolet light can modulate oxide ion transport in a perovskite crystal at room temperature.

The performance of battery and fuel cell electrolytes depends on the motions of electrons and ions within the electrolyte. Modulating the motion of oxide ions within the electrolyte could enhance future battery and fuel cell functionality by increasing the efficiency of the energy storage and output. Use of light to modulate the motions of ions - which expands the source of possible energy inputs - has only been demonstrated thus far for small ions such as protons. Overcoming this limitation of attainable ion motions is something the researchers in this study aimed to address.

A joint research team that includes researchers from the Institute of Solid State Chemistry and Mechanochemistry (the Ural Branch of the Russian Academy of Sciences), the Donostia International Physics Centre and the HSE Tikhonov Moscow Institute of Electronics and Mathematics has studied the characteristics of cubic double perovskite oxides.

To date, experimental measurements of the minerals' characteristics have not corresponded to the results of theoretical modeling. In this new work, the researchers set out to better understand this disparity. The data obtained could allow the improvement of low-temperature fuel cell technologies'one of the main alternatives to current sources of electricity.

A study led by scientists at the U.S. Department of Energy's (DOE) Argonne National Laboratory has shown a shape-shifting quality in perovskite oxides that could be promising for speeding up the oxygen evolution reaction (OER) that is vital for hydrogen production (and a variety of other chemical processes). The research shows that perovskite oxides could be used to design new materials for making renewable fuels and also for storing energy. 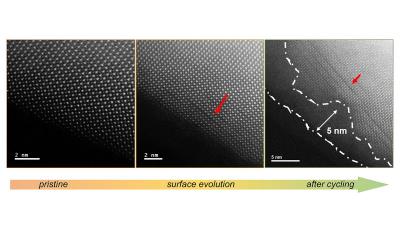 Perovskite oxides are less expensive than precious metals such as iridium or ruthenium that also promote OER. But perovskite oxides are not as active (in other words, efficient at accelerating the OER) as these metals, and they tend to slowly degrade.

Researchers from the Australian National University (ANU) have quantified losses in PV'based solar hydrogen generation systems and have proposed a series of loss-mitigation techniques to improve solar'to'hydrogen (STH) conversion efficiencies.

The scientists identified STH efficiency as the crucial factor that needs to be improved to reduce the overall costs of PV-powered hydrogen generation. 'The U.S. Department of Energy has set a target of 20% STH efficiency by 2020 and an ultimate goal of 25%, to ensure the economic viability of PV'based solar hydrogen generation for large scale hydrogen production,' they specified, adding that current efficiency levels range from 10-15%.

A research team, jointly led by Professor Gun-Tae Kim and Professor Jun-Hee Lee in the School of Energy and Chemical Engineering at South-Korea's UNIST has succeeded in developing high-performance perovskite oxide catalysts using late transition metal oxide materials. In the process, the team discovered the reason behind the improved performance of both the oxygen reduction reaction (ORR) and oxygen evolution reaction (OER), which has been explained by the change in the oxidation state of the transition metal caused by the increase in oxygen vacancies.

Perovskite oxide catalysts are composed of lanthanide, transition metal and oxygen. Owing to the excellent electrical conductivity and bifunctional ORR/OER activity, these catalysts have been considered to be an attractive candidate for metal-air batteries or fuel cells, in which opposite reactions, such as charging and discharging occur steadily. However, due to the high cost and low stability of noble metal catalysts, the development of alternatives is strongly desired.

Australian National University (ANU) researchers have managed to push forward the efficiency of solar-to-hydrogen production that bypasses electrolysers and avoids AC/DC power conversion and transmission losses. They have recently managed to reach 17.6% efficiency, achieved with perovskite-silicon tandem absorbers, and they say their process is open to further refinement that could see clean hydrogen production become cost competitive with other fuels, including brown hydrogen and gas, more quickly than expected.

The INL team developed a perovskite-based oxygen electrode that not only enables operation at considerably lower temperatures than current technologies require (400'600ÂºC), but also exhibits 'triple-conducting' behavior ' it can conduct electrons, oxygen ions and protons within a PCEC.

Scientists at the U.S. Department of Energy's Idaho National Laboratory (INL) have used an oxide of perovskite to create an oxygen electrode for use in electrochemical cells used for hydrolysis-based hydrogen production.

The researchers claim the perovskite oxide could help such cells convert hydrogen and oxygen into electricity without additional hydrogen.

Rice University researchers have created an efficient, low-cost device that splits water to produce hydrogen fuel. The platform integrates catalytic electrodes and perovskite solar cells that, when triggered by sunlight, produce electricity. The current flows to the catalysts that turn water into hydrogen and oxygen, with a sunlight-to-hydrogen efficiency as high as 6.7%. 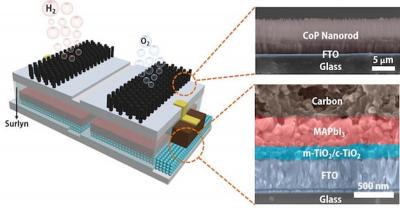 Researchers from the University of Aberdeen have reported that a new family of chemical compounds known as 'hexagonal perovskites' could be extremely beneficial for ceramic fuel cell technology and reducing global carbon emissions.

Ceramic fuel cells are highly efficient devices that convert chemical energy into electrical energy and produce very low emissions if powered by hydrogen, providing a clean alternative to fossil fuels. Another advantage of ceramic fuel cells is that they can also use hydrocarbon fuels such as methane, meaning they can act as a 'bridging' technology which is an important asset in terms of the move away from hydrocarbons towards cleaner energy sources.