Perovskite is a calcium titanium oxide mineral, with the chemical formula CaTiO3, discovered in the Ural Mountains of Russia by Gustav Rose in 1839 and named after Russian mineralogist Lev Perovski (1792–1856).

Perovskites are a class of materials with a similar structure that are easily synthesized and relatively low-cost. Perovskites are considered the future of solar cells and are also predicted to play a significant role in next-gen electric vehicle batteries, displays, sensors, lasers and much more.

Perovskites can have an impressive collection of interesting properties including “colossal magnetoresistance” - their electrical resistance changes when they are put in a magnetic field (which can be useful for microelectronics). Some Perovskites are superconductors, which means they can conduct electricity with no resistance at all. Perovskite materials exhibit many other interesting and intriguing properties. Ferroelectricity, charge ordering, spin dependent transport, high thermopower and the interplay of structural, magnetic and transport properties are commonly observed features in this family. Perovskites therefore hold exciting opportunities for physicists, chemists and material scientists.

A light-emitting diode (LED) is an electronic component that is essentially a two-lead semiconductor light source. It is a p–n junction diode that emits light upon activation by a voltage applied to the leads, which makes electrons recombine with electron holes within the device, releasing energy in the form of photons. This effect is called electroluminescence, and the color of the light is determined by the energy band gap of the chosen semiconductor. 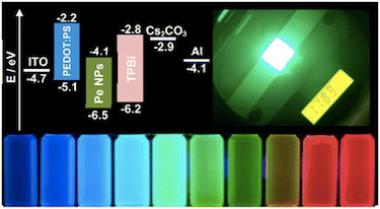 LEDs’ advantages over incandescent light sources include lower energy consumption, longer lifetime, improved physical robustness, smaller size, and faster switching. Light-emitting diodes have become ubiquitous and are found in diverse applications in the aerospace and automotive industries, as well as in advertising, traffic signals, camera flashes and much more.

What can perovskites do for LEDs?

Current high-quality LEDs are based on direct bandgap semiconductors, but making these devices is no easy task because they need to be processed at high temperatures and in vacuum, which makes them rather expensive to produce in large quantities. Perovskites that are direct-bandgap semiconductors could be real alternatives to other types of direct-bandgap materials for applications like color displays, since they are cheap and easy to make and can be easily tuned to emit light of a variety of colors.

Researchers have found that organometal halide-based perovskites (a combination of lead, organics and halogens that arrange into perovskite crystal structure in the solid state) could be very suitable for making optoelectronics devices, since they can be processed in solution and do not need to be heated to high temperatures. This means that large-area films of these materials can be deposited onto a wide range of flexible or rigid substrates. The perovskites also have an optical bandgap that can be tuned in the visible to infrared regions, which makes them very promising for a range of optoelectronics applications. These materials also emit light very strongly, which makes them very suitable for making LEDs. The light emitted by the perovskites can be easily tuned, which could make them ideal for color displays and lighting, and in optical communication applications.

However, a major obstacle that perovskites will have to overcome in order to be used in LED-type devices is that electrons and holes only weakly bind in perovskite thin films. This means that excitons (electron-hole pairs) spontaneously dissociate into free carriers in the bulk recombination layer, leading to low photoluminescence quantum efficiency (PLQE), high leakage current and low luminous efficiency. This obviously impairs perovskites’ ability to create high-performance LEDs, and for perovskite materials to make a comparable impact in light emission, it is necessary to overcome their slow radiative recombination kinetics. Simply put, researchers will have to find ways of effectively confining electrons and holes in the perovskite so that they can “recombine” to emit light. Major progress is already being made in this field, and it seems that perovskites will indeed open the door to a low-cost, color-tunable approach to LED development.

Recent work in the field of perovskite-based LEDs

In July 2016, researchers at Nanyang Technological University in Singapore have fabricated high-performance green light-emitting diodes based on colloidal organometal perovskite nanoparticles. The devices have a maximum luminous efficiency of 11.49 cd/A, a power efficiency of 7.84 lm/W and an external quantum efficiency of 3.8%. This value is said to be about 3.5 times higher than that of the best colloidal perovskite quantum-dot-based LEDs previously made.

In March 2016, researchers at the University of Toronto in Canada and ShangaiTech University in China have succeeded in using colloidal quantum dots in a high-mobility perovskite matrix to make a near-infrared (NIR) light-emitting diode (LED) with a record electroluminescence power conversion efficiency of nearly 5% for this type of device. The NIR LED could find use in applications such as night vision devices, biomedical imaging, optical communications and computing.

In February 2016, researchers from the Universitat Jaume I and the Universitat de València have studied the interaction of two materials, halide perovskite and quantum dots, revealing significant potential for the development of advanced LEDs and more efficient solar cells. The researchers quantified the "exciplex state" resulting from the coupling of halide perovskites and colloidal quantum dots, both known separately for their optoelectronic properties, but when combined, these materials yield longer wavelengths than can be achieved by either material alone, plus easy tuning properties that together have the potential to introduce important changes in LED and solar technologies.

In December 2015, researchers at Pohang University in Korea are reportedly the first to develop a perovskite light emitting diode (PeLED) that could replace organic LED (OLED) and quantum dot LED (QDLED).

Organic/inorganic hybrid perovskite have much higher color-purity at a lower cost compared to organic emitters and inorganic QD emitters. However, LEDs based on perovskite had previously shown a limited luminous efficiency, mainly due to significant exciton (a complex of an electron and hole that can allow light emission when it is radiatively recombined) dissociation in perovskite layers. The research team overcame the efficiency limitations of PeLED and boosted its efficiency to a level similar to that of phosphorescent OLEDs. This increase was attributed to fine stoichiometric tuning that prevents exciton dissociation, and to nanograin engineering that reduces perovskite grain size, and concomitantly decreases exciton diffusion length. PeLED might be a game changer in the display and solid-state lighting industries, with significantly improved efficiency as well as advantages like excellent color gamut and low material cost.

In November 2015, Florida State researchers have developed a cheaper, more efficient LED, or light-emitting diode, using perovskites. The researchers spent months using synthetic chemistry to fine-tune the materials in the lab, creating a perovskite material capable of emitting a staggering 10,000 candelas per square meter when powered by 12 volts. The scientists say that such exceptional brightness owes, to a large extent, to the inherent high luminescent efficiency of this surface-treated, highly crystalline nanomaterial.

PeLEDs are considered as promising candidates for next-generation solution-processed full-color displays. However, the external quantum efficiencies (EQEs) and operational stabilities of deep-blue (<460 nm) PeLEDs still lag far behind their red and green counterparts. 2D-RPPs have excellent optoelectronic properties—ideal for LEDs. Although 2D-RPP-based LEDs have rapidly progressed in terms of performance, it is still challenging to demonstrate blue-emissive and color-pure LEDs. The deep blue of current LED displays is usually produced by indium gallium nitride (InGaN), a costly substance. In the field of LEDs, researchers are seeking alternatives and one of them could be found in 2D-RPPs. 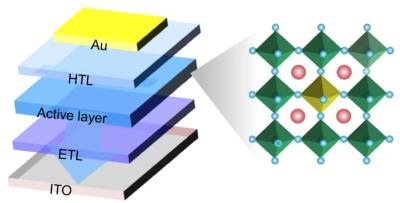 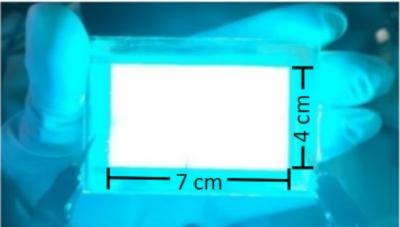 The upcoming Seminar will feature four world-leading speakers, and will also be open to a Q&A session. We will learn more about the state-of-the-art perovskite research and development, with a focus of course on applications in the microLED industry - for both perovskite QDs and PeLEDs.

Researchers from Korea's PEROLED, Seoul National University and Korea Basic Science Institute (KBSI), along with scientists from the UK's University of Cambridge, have reported an ultra-bright, efficient and stable perovskite LED made of core/shell perovskite nanocrystals with a size of approximately 10 nm, obtained using a simple in situ reaction of benzylphosphonic acid (BPA) additive with three-dimensional (3D) polycrystalline perovskite films, without separate synthesis processes.

During the reaction, large 3D crystals are split into nanocrystals and the BPA surrounds the nanocrystals, achieving strong carrier confinement. The BPA shell passivates the undercoordinated lead atoms by forming covalent bonds, and thereby greatly reduces the trap density while maintaining good charge-transport properties for the 3D perovskites.

Researchers from the Ulsan National Institute of Science and Technology (UNIST) have teamed up with researchers from Daegu Gyeongbuk Institute of Science and Technology (DGIST) to develop a patterning technique for the production of perovskite nanocrystal displays which are ultra-thin and high-resolution. The production involves a very simple stamp-like printing process that will facilitate the commercialization of the new technique. 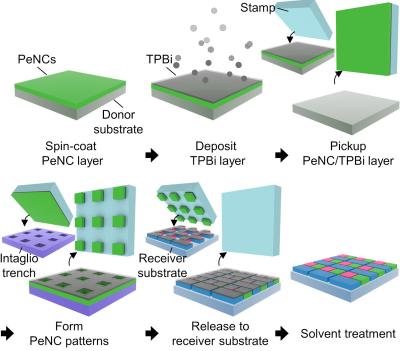 The technique reportedly enabled the team to produce a display with RGB pixel patterns of 2,550 pixels per inch, which is about 400 percent higher resolution than the latest high-end smartphones. 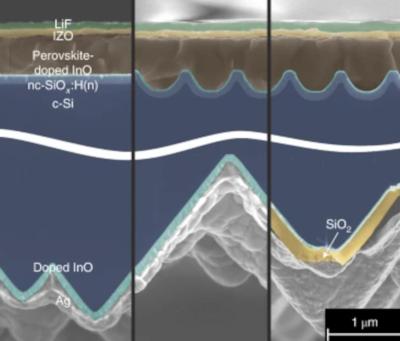 The research team showed a reduction in reflection losses in comparison to planar tandems, with the new devices being less sensitive to deviations from optimum layer thicknesses. The nanotextures also enabled a greatly increased fabrication yield from 50% to 95%. Moreover, the open-circuit voltage was improved by 15 mV due to the enhanced optoelectronic properties of the perovskite top cell. The optically advanced rear reflector with a dielectric buffer layer resulted in reduced parasitic absorption at near-infrared wavelengths. As a result, the team achieved a certified power conversion efficiency of 29.80%.

Perovskite-Info is proud to announce an update to our Perovskite for the Display Industry Market Report. This market report, brought to you by the world's leading perovskite and OLED industry experts, is a comprehensive guide to next-generation perovskite-based solutions for the display industry that enable efficient, low cost and high-quality display devices. The report is now updated to September 2022, with all the latest commercial and research activity. 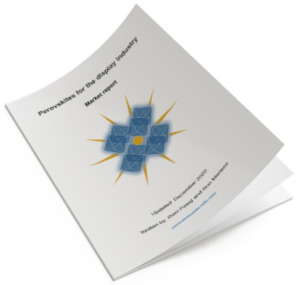 Reading this report, you'll learn all about:

A Florida State University research team, led by FSU Professor of Chemistry Biwu Ma, has developed a simple and effective approach to create an efficient and stable blue light from metal halide perovskites.

Perovskite LEDs can be produced quite easily and at low cost. They show great promise as they are lightweight and can offer flexibility compared to OLEDs, with color purity and tunability similar to LEDs based on III-V semiconductors. However, the poor device stability of perovskite LEDs will have to be overcome before commercial applications can emerge. Typical lifespans of perovskite LEDs are on the order of 10 to 100 hours. In contrast, the minimum lifetime required for an OLED display is 10,000 hours. It is currently challenging to reach this threshold, as halide perovskite semiconductors can be intrinsically unstable due to the ionic nature of their crystal structures—the ions can move around when voltages are applied to the LEDs, leading to material degradation.

In their recent work, a research group led by Prof. Di Dawei and Prof. Zhao Baodan at the College of Optical Science and Engineering of Zhejiang University discovered that by using a dipolar molecular stabilizer, it is possible to make efficient and stable perovskite LEDs with ultralong lifetimes, satisfying the demands of commercial applications. The research was carried out in collaboration with the research groups of Prof. Li Cheng at Xiamen University, Prof. Hong Zijian at Zhejiang University, and Prof. Li Weiwei at NUAA and formerly at Cambridge University.