An introduction to Perovskites

Perovskite is a calcium titanium oxide mineral, with the chemical formula CaTiO3. The mineral was discovered in the Ural Mountains of Russia by Gustav Rose in 1839 and is named after Russian mineralogist Lev Perovski (1792–1856).

The simplest way to describe a perovskite structure is as a cubic unit cell with titanium atoms at the corners (gray), oxygen atoms at the midpoints of the edges (green and blue), and a calcium atom (purple) in the center. (Dark shades are used to indicate layers further back.) 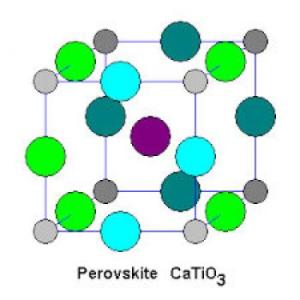 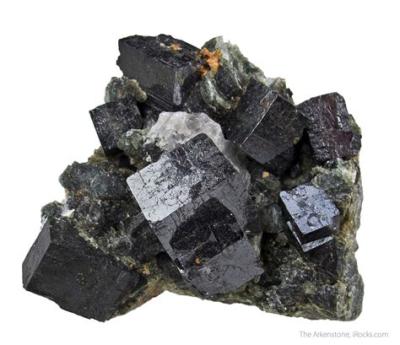 Dependant on which atoms/molecules are used in the structure, perovskites can have an impressive array of interesting properties including “colossal magnetoresistance” - their electrical resistance changes when they are put in a magnetic field (which can be useful for microelectronics). Some Perovskites are superconductors, which means they can conduct electricity with no resistance at all. Perovskite materials exhibit many other interesting and intriguing properties. Ferroelectricity, charge ordering, spin dependent transport, high thermopower and the interplay of structural, magnetic and transport properties are commonly observed features in this family. Perovskites therefore hold exciting opportunities for physicists, chemists and material scientists.

Perovskite materials exhibit intriguing and unusual physical properties that have been extensively studied for both practical applications and theoretical modeling and the materials science and applications of perovskites have been a broad research area open to many revolutionary discoveries for new device concepts. Perovskite’s potential applications are varied and include uses in sensors and catalyst electrodes, certain types of fuel cells, solar cells, lasers, memory devices and spintronics applications.

Solar cells are currently the most prominent perovskite application, as synthetic perovskites are recognized as potential inexpensive base materials for high-efficiency commercial photovoltaics. Perovskite PVs are constantly undergoing research and improvement, going from just 2% in 2006 to over 20.1% in 2015. Experts forecast that the market for perovskite PV will reach $214m in 2025.

Perovskite photovoltaics have a wide bandgap. This creates an opportunity in pairing them up with low bandgap photovoltaic technology, which will result in improved efficiency and will matter in a highly competitive market where system costs depend on efficiencies. In addition, perovskite solar cells offer additional attributes like flexibility, semi-transparency, thin-film, light-weight, and low processing costs.

The original perovskite started as a simple variant of DSSCs in which a perovskite was just a dye, but the device structure has been evolving towards a new and potential planar architecture system. Perovskites offer a significant advantage over silicon in PV applications since perovskites react to a broader range of visible light frequencies, which means it converts more sunlight to electricity than silicon does.

The technology is, however, not fully commercially ready yet and perovskite solar cells will need to face several challenges before commercial success can be achieved; Among these issues are the cells’ durability, stability, poor stability in humid air and the risk that these devices may release lead, a highly toxic element, to the environment.