A team of researchers at EPFL have developed a method that improves both power conversion efficiency and stability of solar cells based on pure iodide as well as mixed-halide perovskites. The new method aslo suppresses halide phase segregation in the perovskite material. The research was carried out by the groups of Professors Michael Grätzel and Ursula Rothlisberger at EPFL and led by Dr Essa A. Alharbi and Dr Lukas Pfeifer. 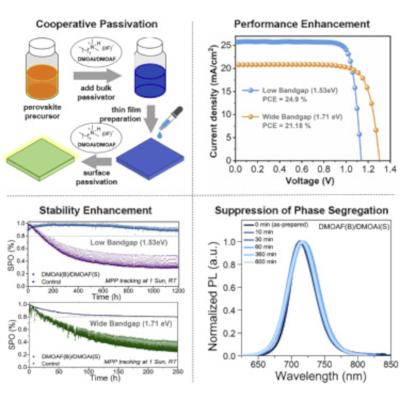 The method treats perovskite solar cells with two alkylammonium halide modulators that work synergistically to improve solar cell performance. The modulators were used as passivators, compounds used to mitigate defects in perovskites, which are otherwise promoting the aforementioned degradation pathways.

The team applies large organic ammonium molecules for modifying a buried interface between a hole-transporting layer (HTL) and perovskite-absorbing material. With the 4-fluorophenethylammonium iodide (FPEAI), they achieved 18.66% efficiency for the large-area (1 cm2) flexible solar cell, a significant improvement over the pristine device without modification.

The scientists added small quantities of neodymium ions directly to the perovskite. They found not only that the augmented perovskite was much more durable when exposed to light and heat, but also that it converted light to electricity more efficiently.

Researchers from South-Africa's University of the Western Cape, University of Missouri and Argonne National Laboratory have developed a new way of enhancing the stability and performance of perovskites.

Missouri University professor Suchismita (Suchi) Guha, the lead author of the study, and her collaborators improved the methods for making lead halide perovskites. Previous techniques for making these thin-film perovskites required liquid processing using solvents, which rendered the films susceptible to degradation when exposed to air. Additionally, with  prior manufacturing processes, one of its molecules undergoes a change to its structure, causing performance limitations in real-world operating conditions.
With the new technique, the researchers were able to prevent the change, holding the affected molecule in a stable structure throughout a large temperature range. Additionally, the new technique rendered the perovskite air stable, making it appropriate for a potential solar cell.

By removing the solvent dimethyl-sulfoxide and introducing dimethylammonium chloride as a crystallization agent, the researchers were able to better control the intermediate phases of the perovskite crystallization process, leading to thin films of greater quality, with reduced defects and enhanced stability.

Researchers from the Department of Energy’s Ames National Laboratory and The University of Toledo have developed a new characterization tool that allowed them to gain unique insight into a perovskite material. Led by Ames' Jigang Wang, the team developed a microscope that uses terahertz waves to collect data on material samples. The team then used their microscope to explore Methylammonium Lead Iodide (MAPbI3) perovskite.

Richard Kim, a scientist from Ames Lab, explained the two features that make the new scanning probe microscope unique. First, the microscope uses the terahertz range of electromagnetic frequencies to collect data on materials. This range is far below the visible light spectrum, falling between the infrared and microwave frequencies. Secondly, the terahertz light is shined through a sharp metallic tip that enhances the microscope’s capabilities toward nanometer length scales.

Researchers from China's Huazhong University of Science and Technology and Singapore's National University of Singapore have introduced an eco-friendly and low-cost organic polymer, cellulose acetate butyrate (CAB), to the grain boundaries and surfaces of perovskites, resulting in a high-quality and low-defect perovskite film with a nearly tenfold improvement in carrier lifetime.

The CAB-treated perovskite films have a well-matched energy level with the charge transport layers, thus suppressing carrier nonradiative recombination and carrier accumulation. As a result, the optimized CAB-based device achieved a champion efficiency of 21.5% compared to the control device (18.2%).