Researchers from Rice University, Northwestern University, Purdue University, University of Washington, CNRS and Argonne National Laboratory have addressed a long-standing issue in making stable, efficient solar panels out of halide perovskites. It took finding the right solvent design to apply a 2D top layer of desired composition and thickness without destroying the 3D bottom one (or vice versa). Such a cell would turn more sunlight into electricity than either layer on its own, with better stability.

The team, led by Chemical and biomolecular engineer Aditya Mohite and his lab at Rice’s George R. Brown School of Engineering, recently reported their success at building thin 3D/2D solar cells that deliver a power conversion efficiency of 24.5%.

Scientists at the U.S. Department of Energy's (DOE) Argonne National Laboratory and Purdue University have developed a machine learning method for screening many thousands of compounds as solar absorbers. Argonne's Maria Chan and Purdue's Arun Mannodi-Kanakkithodi, who led the study, chose to work with a form of artificial intelligence (AI) that uses a combination of large data sets and algorithms to imitate the way that humans learn. It learns from training with sample data and past experience to make ever better predictions.

The team used their machine learning method to assess the solar energy properties of halide perovskites. "Unlike silicon or cadmium telluride, the possible variations of halides combined with perovskites are essentially unlimited," said Chan. "There is thus an urgent need to develop a method that can narrow the promising candidates to a manageable number. To that end, machine learning is a perfect tool."

Researchers from the University of Melbourne, Monash University and IEK-5 Photovoltaik in Germany have developed a large-area laser beam induced current microscope that has been adapted to perform intensity modulated photocurrent spectroscopy (IMPS) in an imaging mode. The new imaging tool could reportedly spot previously undetectable defects in solar cells.

The team's IMPS microscopy was used to study the spatial dependence of moisture-related degradation in a back-contact PSC. Using diffusion-recombination theory, the researchers modeled the IMPS response from which ambipolar diffusion length maps can be extracted from low-frequency experimental data. Apart from this important metric, they illustrated how other frequency bands can be used to study the degradation of a PSC.

Researchers have reported a prototype device that could someday replace existing air-conditioners. The device is more environmentally friendly and uses perovskite-based solid refrigerants to efficiently cool a space.

Currently used hydrofluorocarbon refrigerants used in air conditioners and other cooling devices are potent greenhouse gases and major drivers of climate change. This new work has the potential to tackle this issue and offer a greener solution.

Researchers from Ulsan National Institute of Science and Technology (UNIST) have reported the deposition of dense and uniform α-formamidinium lead triiodide (α-FAPbI3) films using perovskite precursor solutions dissolved in ethanol-based solvent. This addresses the issue of halide perovskites generally not being completely soluble in most non-toxic solvents.

The research team, led by Seok Sang-il, has worked out an ethanol-based perovskite precursor solution by designing a complex compound structure so that perovskites can be dissolved well in ethanol. In their study, the researchers obtained power conversion efficiencies of 24.3% using a TiO2 electrode, and of 25.1% with a SnO2 electrode.

University of Cambridge scientists have developed perovskite-based floating ‘artificial leaves’ that generate clean fuels from sunlight and water. The team expects these could eventually operate on a large scale at sea. The ultra-thin flexible devices take their inspiration from photosynthesis. Since the low-cost, autonomous devices are light enough to float, they could be used to generate a sustainable alternative to gasoline without taking up space on land. 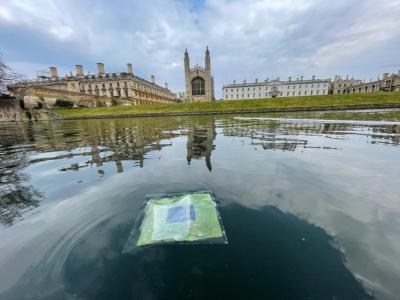 Outdoor tests of the lightweight leaves on the River Cam showed that they can convert sunlight into fuels as efficiently as plant leaves. River Cam is the main river flowing through Cambridge in eastern England, and the testing occurred near iconic Cambridge sites including the Bridge of Sighs, the Wren Library, and King’s College Chapel.

Researchers from the Qingdao Institute of Bioenergy and Bioprocess Technology (QIBEBT) and Chinese Academy of Sciences (CAS) have developed a method for processing formamidinium-based perovskite films, using a unique ammonia treatment to remove pore structures formed during the processing. 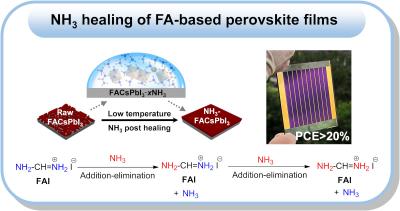 Researchers from China's University of Science and Technology of China (USTC) and Shaanxi Normal University have synthesized a new molecular perovskite, DABCO-CsBr3 (DABCO = N,N′-diazabicyclo[2.2.2]octonium), for use in flexible X-ray detectors. The material was prepared from DABCO, CsBr, and HBr in aqueous solution and obtained in the form of colorless crystals.

The team found that DABCO-CsBr3 possesses good mechanical properties for use in flexible devices. Compared with the metal-free equivalent DABCO-NH4Br3, DABCO-CsBr3 has a stronger X-ray attenuation capability. The researchers built a flexible X-ray detector, using a poly(vinylidene fluoride) (PVDF) polymer matrix that was mixed with DABCO-CsBr3 to create a composite film. This film shows a linear relationship between the X-ray-induced current density and the X-ray dose rate. According to the team, the material could have applications in X-ray security screening systems or medical diagnostics.

Tokyo Chemical Industry (TCI) is a global supplier of laboratory chemicals and specialty materials. TCI is a leading the next-generation solar technology industry by providing high-quality and reliable materials, including metal halide perovskite precursors such as lead/tin halides and organic onium salts, as well as carrier transporting materials. 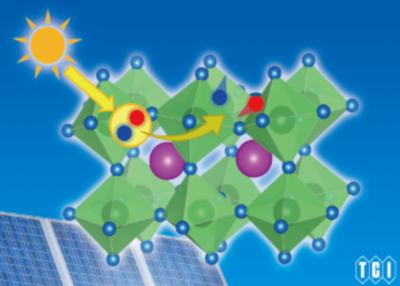 "It is no exaggeration to say that the introduction of perovskite materials innovates various fields of optoelectronics, including photovoltaic solar cells, photodetectors, light-emitting devices, and many more,' says one of the senior scientists from Alfa Chemistry Materials. 'Perovskites can be obtained from a wide range of materials and can be prepared with different methods, including the traditional high-temperature solid state method, sol-gel method, hydrothermal synthesis method, high energy ball milling method and precipitation method. Besides, other methods like vapor deposition method, supercritical drying method, microemulsion method and self-propagating high-temperature combustion synthesis method could also be used.'