Oxford Photovoltaics Limited (Oxford PV) was founded in 2010 as a spin-out from the University of Oxford to commercialize a new technology for thin-film solar cells. It was amongst the first in the world to recognize the potential of perovskites to act as a low-cost, highly efficient solar cell absorber material to convert sunlight into electricity.

Oxford PV is developing and commercializing thin-film perovskite solar cells, which can be printed directly onto silicon solar cells, CIGS solar cells or glass. Pioneering work developing perovskite thin-film solar cells has delivered a route to boosting the efficiency of current commercial cells; using a high efficiency coating in a multi-junction or â€œtandemâ€ cell architecture. In addition, printing perovskites directly onto glass has led to a semi-transparent coating ideal for BIPV applications and, once integrated into the glazing units of a building, the technology is capable of providing a significant percentage of the buildingâ€™s electrical energy requirements directly from sunlight.

The company has exclusively licensed the rapidly growing portfolio of fundamental intellectual property developed by its academic team.

A UK-based quantum software company called Phasecraft will lead a project modelling new perovskite-silicon materials for solar photovoltaics. The project, in collaboration with Oxford PV and scientists at University College London (UCL), is aimed to support the development of quantum computing to simulate “currently intractable problems” in PV materials modelling, according to a recent statement.

Not many details were given regarding the new project, which received an award from UK Research and Innovation’s Commercializing Quantum Technologies Challenge. It was, however, said that it will set out to develop a modelling capability that is tailored to the real-world needs of the PV industry.

A team of scientists from Technische Universität Berlin, Oxford PV Germany, German Philipps-Universität Marburg, Helmholtz Zentrum Berlin (HZB) and Oxford PV UK has, for the first time, assessed the environmental performance of industrially produced perovskite-on-silicon PV modules. Understanding the environmental impact of solar PV modules across their entire lifecycle is essential for the design of more sustainable solar energy systems. However, lifecycle assessment of perovskite-on-silicon PV modules has so far relied heavily on data from laboratory and test facilities rather than manufacturers. 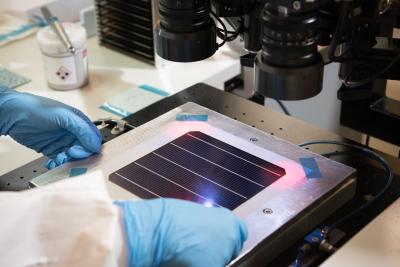 The researchers conducted a comprehensive lifecycle assessment of a perovskite-on-silicon module across a number of categories including global warming potential, water consumption, human and marine toxicity, and metals usage. They assessed the materials and energy input for a module’s ‘cradle to gate’ lifecycle, covering all materials and energy input for wafer production, manufacture of the perovskite cell, and module production. The researchers then weighed up the environmental impact of the tandem module against the electricity generated over its lifetime.

Perovskite solar panels have been under intensive R&D, and it seems as if commercial production is right around the corner. Some pilot-scale production lines are already functional, and companies are now ramping up production of perovskite panels, using various technologies.

UK-based Oxford PV, for example, recently announced that it has completed the build-out of its 100 MW manufacturing site in Germany, and it is on track to start full production in 2022. China's Microquanta Semiconductor perovskite panel factory is reportedly also nearing production (which should have started late 2020, but updates have not been available since), and another China-based company, GCL, has raised around $15 million USD to expand its pilot-scale production factory to mass production (100 MW).

'We identified perovskites as the perfect partner for a tandem system with silicon,' commented author Laura Miranda PÃ©rez.

Solar panel developer and producer Meyer Burger says it is pursuing new research projects on the industrialization of perovskite solar cells. The company is aiming to partner with research institutes worldwide for perovskite technologies.

Meyer Burger also updated that an "extensive industrial research project" is already underway with the Fraunhofer Institute in Germany.

Earlier this month, Oxford PV announced the completion of the build-out of its manufacturing site in Brandenburg an der Havel, Germany. Oxford PV concluded that announcement by saying that "With the achievement of this factory milestone, Oxford PV has terminated its exclusive relationship with Meyer Burger".

Meyer Burger Technology was informed of the termination of partnership (in place since 2019) through the press release (as well as a letter from Oxford Photovoltaics). In view of the unexpected announcement of termination by Oxford PV, Meyer Burger is reportedly considering legal options to enforce its rights.

Oxford PV has announced that it has completed the build-out of its manufacturing site in Brandenburg an der Havel, Germany. 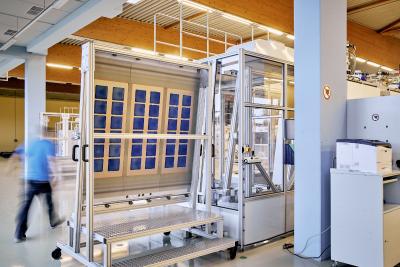 Oxford PV has reached a new efficiency world record for perovskite-silicon tandem cells at 29.52%, passing the previous record set less than a year ago by Helmholtz Zentrum Berlin. The new record has been certified by the U.S. National Renewable Energy Laboratory. 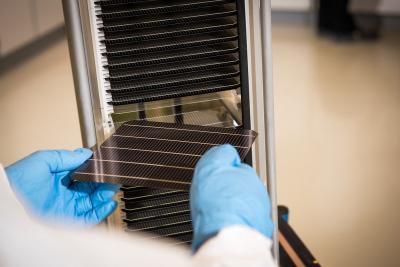 The new record was achieved on a cell measuring 1.12cmÂ², produced in a laboratory setting. Oxford PV previously held the tandem cell efficiency record at 27.3%, and then 28%, before a group at Helmholtz Zentrum Berlin (HZB) pushed the record to 29.15% in January 2020. Both Oxford PV and HZB have stated that they have clear roadmaps to push this record beyond 30% in the near future.

Oxford PV, currently involved in building a manufacturing facility in Brandenburg an der Havel for its silicon perovskite tandem solar cells (in which it is investing around â¬44 million), has received â¬8.8 million funding from the state Ministry of Economics in Potsdam for this project.

'I am delighted that Oxford Photovoltaics has brought the solar technology developed by the company itself to market maturity and that it will soon start with industrial series production here in Brandenburg,' said Brandenburg Minister for Economic Affairs JÃ¶rg Steinbach. 'The decision by Oxford PV to expand the production facility in HohenstÃ¼cke is a clear commitment to our community.'

Professor Snaith said: "Perovskite PV has demonstrated its immense opportunity to transform solar energy generation... I am especially looking forward to the next 12 months and seeing our first commercial perovskite-silicon solar product on the market."