The Centre for Solar Energy and Hydrogen Research Baden-Württemberg (ZSW) has made progress towards the goal of coating large-area perovskite solar cells on an industrial scale using a process that uses more benign solvents than available hazardous solvents like dimethylformamide. The team of researchers developed a coating process for perovskites that uses a single ecofriendly solvent, dimethyl sulfoxide. The ZSW team applied this method to produce a solar cell nearly as efficient as cells made with the toxic solvent.

Perovskite precursors have to first be dissolved so they can be applied in uniform layers to the substrate. This requires solvents that usually contain dimethylformamide (DMF), which is hazardous to health and the environment. This toxicity hampers efforts to scale this process up to industrial production. Manufacturers would have to produce and dispose of larger quantities of the solvent and take even more stringent occupational safety measures, also causing costs to rise. For these reasons, many researchers and manufacturers are in search of environmentally compatible solvents that are suitable for industrial applications. This use case requires chemical properties that very few substances exhibit. Dr. Jan-Philipp Becker, the head of the ZSW’s Photovoltaics: Materials Research department, worked with his team to investigate pure dimethyl sulfoxide (DMSO) to see if it could serve this purpose.

Tin (Sn)-based metal halide perovskites (MHPs) could be an environmentally benign alternative to lead-based ones, which are toxic. However, some critical issues need to be resolved before Sn-based MHPs can be leveraged in planar semiconductor devices. When arranged into a 2D structure (or quasi-2D structure with a few layers), defects in the crystal structure of Sn-based MHPs called 'grain boundaries' hamper the mobility of charge carriers throughout the material. If used in a TFT, this phenomenon results in a large series resistance that ultimately degrades performance. In addition, a TFT made using an Sn-based MHP arranged into a 3D structure faces a problem of extremely high carrier density of the 3D material, that causes the transistor to be permanently ON unless very high voltages are applied.

Scientists from Tokyo Tech, National Institute for Materials Science and Silvaco Japan have proposed a novel concept based on a hybrid structure for Sn-based metal halide perovskites (MHPs), called the '2D/3D core'shell structure.' In this structure, 3D MHP cores are fully isolated from one another and connected only through short 2D MHP strips (or 'shells'). This alternating arrangement manages to address both these issues, according to the team.

Scientists at the National Renewable Energy Laboratory (NREL) and Northern Illinois University (NIU) have developed a way to prevent lead from escaping damaged perovskite solar cells. This could go a long way in addressing concerns about potential lead toxicity. 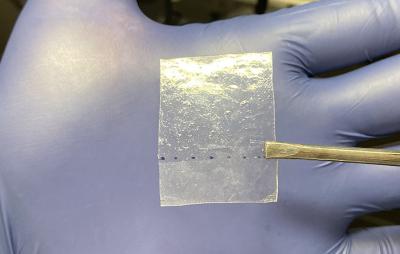 Image by NREL, from Phys.org

The light-absorbing layer in perovskite solar cells contains a small amount of lead. Simply encapsulating solar cells does not stop lead from leaking if the device is damaged. Instead, chemical absorption may hold the key. The researchers report being able to capture more than 99.9% of the leakage.

University of Cambridge and Cornell University Researchers have done 'cradle-to-grave' life cycle assessments of a variety of perovskite solar cell architectures, and found that substrates with conducting oxides and energy-intensive heating processes are the largest contributors to primary energy consumption, global warming potential and other types of impact.

The team therefore focus on these materials and processes when expanding to 'cradle-to-cradle' analyses with recycling as the end-of-life scenario. Their results revealed that recycling strategies can lead to a decrease of up to 72.6% in energy payback time and a reduction of 71.2% in greenhouse gas emission factor.

Researchers from EPFL, UniversitÃ¤t TÃ¼bingen and University of Fribourg, led by Professor Michael GrÃ¤tzel at EPFL's School of Basic Sciences, used a novel method with multimodal host-guest complexation to significantly improve the stability of perovskite solar cells while also reducing the release of lead into the environment. The strategy involves using a member of the crown ethers, a family of cyclic compounds whose ring-like atomic structure resembles a crown.

The researchers used the dibenzo-21-crown-7 in the fabrication of formamidinium lead iodide perovskite solar cells. They demonstrated the efficiency of this synergistic approach with cesium metal ions, for which the crown ether shows a strong affinity. Acting as a vehicle, the crown ether assembles at the perovskite film's interface and delivers the cesium ions into its interior.

Semiconductors that can exploit the omnipresent visible spectrum of light for different technological applications are highly sought after, but such semiconductors are often dexpensive and toxic. A group of scientists from Tokyo Institute of Technology and Kyushu University have collaborated to develop a low-cost and non-toxic narrow-gap semiconductor material with potential 'light-based' or photofunctional applications. 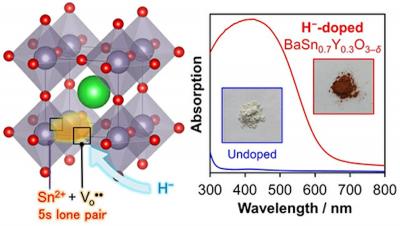 Tin-containing oxide semiconductors are cheaper than most semiconductor materials, but their photofunctional applications are constrained by a wide optical band gap. The team of scientists, led by Dr. Kazuhiko Maeda, Associate Professor at the Department of Chemistry, Tokyo Institute of Technology, developed a perovskite-based semiconductor material that is free of toxic lead and can absorb a wide range of visible light.

Scientists from Swansea University have found that a non-toxic biodegradable solvent called GVL could remove a major barrier to the production of printed carbon perovskite solar cells.

A known barrier to the large-scale manufacture and commercialization of these cells is the solvents used to control crystallization of the perovskite during fabrication because they are made from toxic, unsustainable materials that are banned in many countries. Now, researchers at SPECIFIC Innovation and Knowledge Centre, Swansea University, have discovered that a non-toxic, biodegradable solvent called GVL (Î³-Valerolactone) could replace these solvents without impacting cell performance.

Scientists at the National Renewable Energy Laboratory (NREL) have investigated how to manufacture perovskite materials and solar technology with human health in mind. 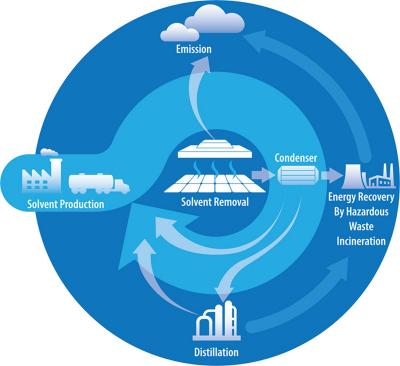 Scientists from the South Dakota School of Mines and Technology and Michigan State, Toledo and Wisconsin universities have found bifacial perovskite PV cells have the potential to become more environmentally friendly than conventional crystalline silicon devices, due to their increased energy yield.

The scientists examined sites at Toledo, in Ohio and Golden, Colorado, to take account of high and low latitude and humidity conditions. The researchers analyzed the environmental impact of single-junction, bifacial perovskite cells with high and low bandgaps, and multi-junction devices of the same type with two-terminal (2T) and four-terminal (4T) structures. They quantified the life cycle energy production from the cells under real-world conditions and benefiting from diverse albedo environments including installation above sandstone, concrete, grass and snow.

Scientists from the Korea Institute of Machinery and Materials, Kyungpook National University, Sungkyunkwan University, Sejong University and Yonsei University in Korea, in collaboration with Uppsala University in Sweden, Imperial College London and National Renewable Energy Laboratory in the U.S, recently devised a way to sustainably collect pollutants secreted from PSCs without sacrificing the panel itself. Using this new approach, the scientists were able to safely recycle 99.7% of lead in their samples.

In the study describing their work, the researchers explain that they're not the first to attempt to tackle this issue, but that previous approaches to adsorbing lead have been limited by the number of naturally occurring lead solvents.