Researchers from the Eindhoven University of Technology, the Netherlands Organization for Applied Scientific Research (TNO), and Indian steel manufacturer Tata Steel recently fabricated an inverted perovskite solar cell based on a polymer-coated steel substrate that can achieve a power conversion efficiency approaching that of non-inverted reference solar cells with a similar stack design. 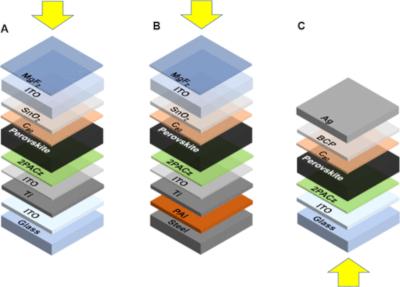 Substrate (A and B) and superstrate (C) p–i–n solar cells on glass (A and C) and steel (B). Image from ACS Publication study

The cell has a p-i-n structure and relies on nickel-plated steel coated with a polyamide-imide (PAI) planarization layer, which serves as an insulating layer. The researchers used an opaque titanium electrode covered with a thin sputtered indium tin oxide (ITO) layer to enable the binding of the phosphonic acid anchoring groups of the monolayer based on a perovskite known as 2PACz, which serves as a hole-collecting electrode.

The scientists also used buckminsterfullerene, a molecule which is also known as C60, for the fabrication of the ETL. They also added a tin(IV) oxide (SnO2) buffer layer, via atomic layer deposition (ALD), to prevent damage to the underlying stack during sputter deposition of the transparent ITO top electrode.

The performance of the solar cell was compared under standard illumination conditions to that of two reference devices built on a glass substrate and a glass superstructure, respectively. The latter showed a power conversion efficiency of 19.1%, an open-circuit voltage of 1.13 V, a short-circuit current of 20.8 mA cm–2, and a fill factor of 0.81.

“This demonstrates that substrate-configuration cells fabricated on the Ni-plated steel substrate can reach similar performance levels as those made on glass,” the scientists said. “Strategies to further increase the PCE of substrate-configuration cells can therefore focus on reducing the optical losses in the ETL, enhancing the reflection of the bottom electrode, and using a less resistive transparent top contact.”