Researchers from The Australian National University, Flinders University, University of New South Wales and The University of Sydney have developed a perovskite solar cell with a novel passivation process based on the use of guanidinium (Gua) and octylammonium (Oa) spacer cations. 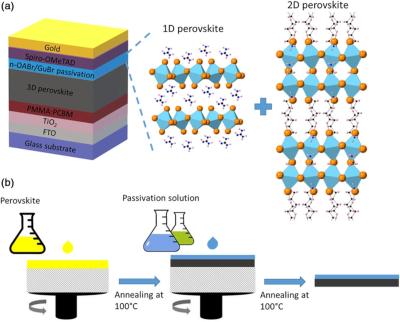 A schematic showing the device structure and the surface incorporation of GuaBr, OABr, and their mixture. Image from RL Solar

The researchers explained that they designed the cells to be used in small-scale residential solar systems or large-scale solar power plants. The perovskite solar cell technology can reportedly be combined with the existing silicon solar cell technology in a tandem configuration to achieve efficiency of up to 30%.

The research group used guanidinium bromide (GuaBr) and octylammonium bromide (OABr) for the cations, which were said to outperform their monospace cation counterparts in terms of short-circuit current density, power conversion efficiency, and thermal stability. The passivation layers were embedded on the hole transport layer (HTL) side at the HTL/perovskite interface.

“To optimize the ratio between GuaBr and OABr components, three different volume ratios of 1:1 (termed as 1G-1O), 1:2 (named as 1G-2O), and 2:1 (referred to as 2G-1O) were examined,” the team said. “After spin coating the 3D perovskite precursor solution on the substrate and annealing it on a hotplate at 100 C for 30 minutes, the passivation solution is spun on the substrate, followed by another annealing at 100 C for 10 minutes.”

The 1G-1O cell sample achieved an average open-circuit voltage of of 1.2V, which is 30 mV higher than that of a reference cell without the new cations. This indicates a reduction in nonradiative recombination, according to the researchers.

“With dual-cation passivation layer, the efficiency increased from 21.37% for the control cell to 23.13% for the passivated device, along with much improved shelf-life stability.” they said. “In addition, in light soaking stability, test device 1G-1O maintained over 97% of its initial efficiency after 60 hours.”

The researchers plan to proceed by exploring other combinations of various spacer cations as the surface passivation layer, which they fell could further promote enhancements in cell performance and stability.