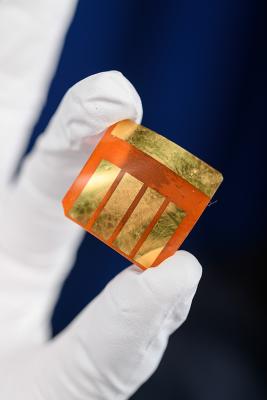 'Perovskites could really change the game in solar. They have the potential to reduce costs without giving up performance. But there's still a lot to learn fundamentally about these materials,' said David Fenning, a professor of nanoengineering at the University of California San Diego and co-senior author of the study. 'We're looking deeper into some of the state-of-the-art chemistries to understand what drives perovskite performance and why they work so well.'

'Perovskite solar cells offer a lot of potential advantages because they are extremely lightweight and can be made with flexible plastic substrates,' said Juan-Pablo Correa-Baena, an assistant professor at the Georgia Institute of Technology who co-led the study. 'To be able to compete in the marketplace with silicon-based solar cells, however, they need to be more efficient.'

In recent years, researchers have focused on testing different recipes to achieve better efficiencies, such as adding rubidium and cesium cations to lead-halide perovskites. Studies have shown that adding these alkali metal cations improves perovskite stability and performance, but little was known about why.

To answer this question, Correa-Baena teamed up with Fenning, a researcher at the UC San Diego Sustainable Power and Energy Center whose lab specializes in using X-ray imaging techniques to probe inside perovskites at the nanoscale and create high-resolution maps of their atomic structures.

'By looking at the composition within the perovskite material, we can see how each individual element plays a role in improving the performance of the device,' said Yanqi (Grace) Luo, a nanoengineering PhD student in Fenning's Solar Energy Innovation Lab and co-first author of the study.

Their experiments showed that adding low concentrations of either rubidium or cesium cations caused halide atoms within the material to distribute evenly, resulting in up to two percent higher conversion efficiency than perovskites without these additives.

'We found that uniformity in the chemistry and structure is what helps a perovskite solar cell operate at its fullest potential. Any heterogeneity in that backbone is like a weak link in the chain,' said Fenning.

While adding small amounts of rubidium or cesium was beneficial, the team also observed that adding too much caused some perovskite cations to cluster together, creating microscopic inactive 'dead zones' in the solar cell that produce no current.

'This was surprising,' said Fenning. 'Having these dead zones would typically kill a solar cell. In other materials, they act like black holes that suck in electrons from other regions and never let them go so you lose current and voltage. But in these perovskites, we saw that the dead zones around rubidium and cesium weren't too detrimental to solar cell performance, though there was some current loss. This shows how robust these materials are but also that there's even more opportunity for improvement.'