This article is an extract from The Perovskite Handbook, 2020 edition, and explains the current market status of Perovskites Solar Panels.

Solar Panels is the most prominent potential perovskite application, as synthetic perovskites are recognized as inexpensive base materials for high-efficiency commercial photovoltaics. Perovskite PVs are constantly undergoing research and improvement, going from just 2% in 2006 to over 23% today, and constantly improving. Experts forecast that the market for perovskite PV will reach $214 million in 2025.

A single PV cell can only generate a limited amount of electricity, and so to increase the electricity collected to a point where it is enough to use in everyday applications, a number of cells can be interconnected in a sealed, weatherproof package called a panel / module. So, when multiple solar cells are connected as an integrated group, all oriented in one plane, a solar photovoltaic panel or module is created. In general, it can be said that the number of series cells indicates the voltage of the module, whereas the number of parallel cells indicates the current.
The interconnection and packaging of the panel results in some efficiency loss.

To increase the collected voltage and current, PV modules can be wired in series and parallel into what is called a PV array. The flexibility of the modular PV system allows to create solar power systems that can meet a wide variety of electrical needs.

In a similar way to PV modules, the interfaces and packaging can result in efficiency loss.

A PV system is the full, end product - and may include, in addition to the PV Module (one or more or arrays, of course): a charge controller, batteries ( if it’s a standalone system), power inverter, and more. The PV module converts the solar light energy into DC electrical energy. The charge controller conditions the DC electrical voltage and current produced by the PV module to charge a battery, if needed. The battery can store the DC electrical energy so that it can be used when there is no solar energy available (night time, cloudy days etc). The inverter converts the DC power produced by the PV module / stored in the battery into AC power.

While the former definitions cover the traditional commercial types of solar components, PV devices is a term that relates to R&D usages.

Usually researchers and developers use small cell sizes in their lab experiments - small enough that these cannot truthfully be referred to as solar cells (even though companies will sometimes refer to these small devices as ‘cells’.). Typical perovskite research device can range from 1 mm2 to 1 cm2. The efficiency of a small device may be higher than the efficiency of a larger cell structured in the same way.

Smaller PV modules are sometimes referred to as mini-modules. These are not meant for use in solar generation systems, but can be utilized in specific small-area applications (such as calculators or toys).

In the past few years, several companies and researchers reported new records for perovskite solar technologies. While some of these achievements are very impressive, one must remember that various reports are difficult to compare as they sometimes relate to different sizes and technologies.

Oxford PV, for example, reported in June 2018 that it developed 27.3% perovskite-silicon tandem device (1 cm2). In December 2018, the Company announced a certified 28% efficiency world record for its silicon and perovskite tandem solar cell. This seems to be the best performing tandem cell for that time.

In July 2018, Toshiba and NEDO announced an even larger perovskite module at 703 cm2. The efficiency of Toshiba’s latest module is 11.7%.

This was an extract from The Perovskite Handbook, 2020 edition. The book gives an introduction to perovskite materials, the technology, industry and market. 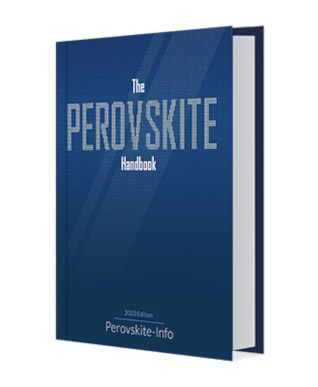 Reading this book, you'll learn all about: