Researchers from ITMO University, along with colleagues from Sweden, Australia, the United States and Lithuania, have discovered Fano resonance in perovskite nanoparticles and gained control over the resonance spectrum for an array of inorganic nanoparticles. This newly designed method reversibly adjusts the radiation color of nanosized light sources. Previously, radiation color could be specified only during nanoparticle synthesis, but now it can be changed after synthesis. Stability and electromagnetic resonances of the particles are retained during this adjustment. This makes them promising for optical chips, LEDs and optoelectronic devices. 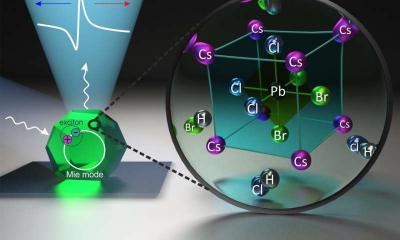 Resonance is the coincidence between frequencies of two oscillations increasing their intensity. A half-century ago, the Italian theoretical physicist Hugo Fano described a special type of resonance with an asymmetric profile arising from the interference of two wave processes. Since then, Fano resonance has been actively used in photonics, for example, to create fast optical switches. The reduction of such switches to nanoscale will dramatically increase the performance of photonic chips by integrating a huge number of elements in one device.

The team worked on a new way of tuning the radiation of nanoparticles. Instead of synthesizing several types of particles, they proposed changing the composition of one ready particle through special chemical treatment. As this adjustment is reversible, it can be repeated many times without changing the stability of the particles and the intensity of their radiation.

"We conducted experiments with single organo-inorganic perovskite nanoparticles, as well as with an unordered array of completely inorganic nanoparticles dispersed in the polymer matrix. We managed to register Fano resonances in both cases, but the reversible tuning was possible only for inorganic particles. They include bromine anions, and during the adjustment, we reversibly changed the bromine atoms to the chlorine atoms. This makes it possible to shift the emission spectrum of particles in the range of 420-520 nm. Organo-inorganic nanoparticles proved to be unsuitable for a similar adjustment of photophysical properties due to the presence of organic cations in their structure," says Anatoly Pushkarev, research associate at the Laboratory of Hybrid Nanophotonics and Optoelectronics of ITMO University.

The researchers explain that the proposed method for tuning the emission spectrum of perovskite nano-antennas is universal. It can be applied to other inorganic nanostructures based on lead halides. Thus, it is possible to obtain complex optoelectronic devices on a chip with the minimum amount of nanoparticles. Such miniature devices can serve for data transmission and processing, as well as for sensing.

"The results we obtained are promising not only for the creation of photonic integrated circuits. The reconstruction of the emission spectrum of the nanoparticles array and the change in the position of the Fano resonance in their optical absorption spectrum can be used, for example, to determine the concentration of hydrogen halide vapor (HCl, HBr, HI) in the medium," says Ekaterina Tiguntseva, a graduate student of the Faculty of Physics and Technology of ITMO University.