Researchers at CSIRO and Monash University have reported a flexible perovskite solar cell manufactured using roll-to-roll compatible “printing” type processes, which could potentially be used in large-scale manufacturing. To achieve this, the team developed a viable roll-to-roll process to deposit the electrode layer, which has thus far been a major challenge. The team managed to fabricated cells which achieved a maximum efficiency of 16.7%. 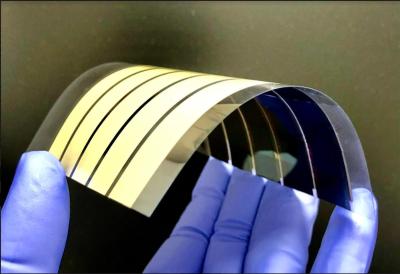 Roll-to-roll processes signify a potential for low-cost manufacturing of flexible perovskites. However, adding the electrode layer in a process compatible with the roll-to-roll setup has proven to be a challenge. The research team in this recent work set out to address this issue and develop a process that could allow the electrode layer to be deposited without the need for solvents or heat treatments that potentially damage the perovskite layer as well.

“Replacement of the thermally evaporated metal electrode is a major challenge to be overcome and is a key to realizing flexible fully printed PSCs,” the group said. “This is particularly important because the metal electrode used almost exclusively in the record-breaking PSCs is vacuum evaporated gold, which accounts for about 70% of the cost of a PSC module.”

The group developed a process in which an electrode made from carbon and silver is first fabricated on a detachable plastic (PET) substrate, and then pressed onto the top of the perovskite solar cell. The PET layer is then removed and can be reused.

Since the step of pre-treating the electrode layer before it is applied to the cell eliminates solvents in the pastes used, the process can be called “solvent free,” and scientists may be able to work with printing pastes not otherwise suitable for perovskite materials. The rest of the cell was assembled using more established roll-to-roll techniques, and then put through a series of tests.

The champion cells in the study achieved an efficiency of 16.7%, which the group says is a record for such a device. In further testing, the cells were encapsulated with another flexible plastic material, saw no significant performance loss after 24 hours under constant one-sun illumination in ambient, indoor atmosphere. The flexible cells, this time without the encapsulant, were also subject to a series of bending tests, retaining better than 90% of its initial performance after 3,000 convex bends, and falling just below 80% after 3,000 concave bends.