Researchers at Arizona State University have demonstrated a perovskite-silicon tandem cell they claim has low reflectance losses and strong potential for commercial production. The ASU team says that this new cell could lead to 30% efficiency tandem devices. The tandem architecture involves a manufacturing process featuring the solution-based blading of perovskites onto textured silicon wafers. 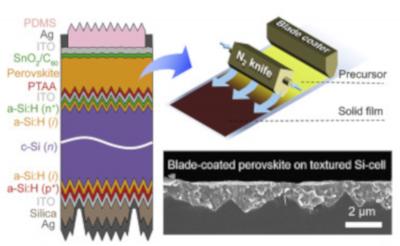 The device is manufactured in a nitrogen-assisted blading process which ensures deposition of the perovskite layer onto textured silicon is achieved with typical pyramid heights of 1Î¼m. The manufacture of such tandem devices typically results in perovskite heights of 3-10Î¼m.

Smaller perovskite pyramids help reduce front-surface reflectance and an associated inability to scatter light into the silicon bottom layer, according to the researchers.

'These pyramids are rough enough to scatter light within the silicon nearly as efficiently as large pyramids but smooth enough to solution-process a perovskite film,' said the Arizona group.

The scientists said the thickness of perovskite films in solar cells is normally 0.5-1Î¼m and smaller perovskite pyramid heights meant the layer on their device had to be conformally deposited to avoid shunting ' raising the level above. They used high-throughput blade coating of a wide-bandgap perovskite on sub-micrometer-scale, double-sided textured silicon. The process was said to 'planarize' the textured silicon surface by filling the valleys between pyramids.

'The texture results in an elongated light path length in the silicon, boosting the bottom cell current compared to a cell with a planar front surface,' said the researchers. 'The tandems are finished with a textured front polydimethylsiloxane (PDMS) layer that is representative of textured module glass and that reduces reflectance at the near-planar surface of the perovskite top cell.'

The scientists applied a nitrogen (N2)-knife-assisted blading process to test the ability of the cell to planarize sub-micrometer-textured wafers.

'[An] N2 knife helps remove solvent vapor, facilitating a quick transition of solution into solid during the blading process,' said the Arizona group.

Ultrathin polytriarylamine (PTAA) layers are used in perovskite cells to passivate interfacial and grain boundary defects. The researchers said the perovskite layer to be coated on the PTAA must be thick enough to bury the underlying pyramids ' as these may shunt the top cell ' and at the same time be thin enough to collect photo-generated carriers.

'The thickness of a blade-coated perovskite layer can be tuned through the concentration of the perovskite precursor, gap distance between the blade and substrate and blade-coating speed,' they said. 'Whereas the perovskite layer can be thick and planarizing in our new tandem cell design, the PTAA layer must still be thin, uniform and thus conformal to the pyramids because PTAA impedes hole transport when it is thicker than approximately 15nm, reducing cell fill factor.'

The team said the best tandem cell developed was held at its maximum power point for 600 seconds and maintained a stabilized power conversion efficiency of 26.1%.

'The unencapsulated PDMS/planarized tandem cell maintained 92% of its initial efficiency after constant illumination for 100 [hours] in ambient atmosphere,' added the researchers.

'We thus expect that this tandem architecture is poised to be adopted by silicon solar cell manufacturers that are hunting for tandem technologies with low required capital expenditures, the potential for rapid scaling and minimum modification of their silicon cells,' said the developers.