Scientists from China's Huaqiao University and Henan Normal University have developed a controllable moisture treatment for perovskite films that can promote the mass transportation of organic salts. The films were used to fabricate a 0.2 cm2 perovskite solar cell that was able to retain 80% of its initial efficiency after 1200 h. 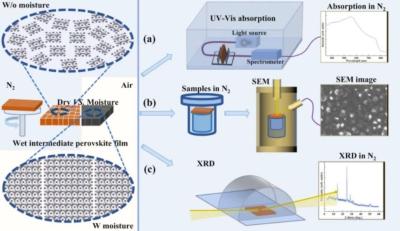 The group investigated the effects of moisture in the air on the intermediate and final perovskite films in solar cells and developed the controllable moisture treatment that relies on a series of nitrogen (N2)-protected characterization techniques.

“Many previous reports claimed that moisture could penetrate the bulk of perovskite film, destroy the organic-inorganic interactions, and generate the undesired lead(II) iodide (PbI2), resulting in the loss of photovoltaic properties,” the team explained. “The disruptive effect of H2O on perovskite was ascribed to the irreversible hydration process, leading to the degradation of perovskite to (PbI2.). However, when the dose of H2O was low, this hydration process was reversible, and the hydrated product could spontaneously dehydrate in a dry atmosphere.”

“We found that the humidified film can trigger the quasi-solid-solid reaction between organic salts and PbI2, realizing a rapid homogeneous distribution of the PbI2-organic salts complex,” they stated. “Consequently, the resultant perovskite films exhibited a more homogenous perovskite phase with larger crystal grains and higher crystallinity.”

The scientists fabricated a 0.2 cm2 solar cell with perovskite films fabricated through a sequential two-step deposition process and obtained the PbI2 films by spin-coating the PbI2 solution onto substrates made of indium-tin-oxide and tin oxide (ITO/SnO2). The cell was based on a Spiro-OMeTAD precursor. Its efficiency and stability were tested under 100 mW cm−2 illumination. “Finally, we obtained a power conversion efficiency of approaching 24% (23.93%) with improved open-circuit voltage and fill factor,” they stated. “Moreover, the corresponding device can remain over 80% of initial efficiency after continuous 1-sun illumination of over 1200 h, showing robust operational stability.”

“This work gives a feasible method for investigating metastable substances under protective conditions,” the team concluded.