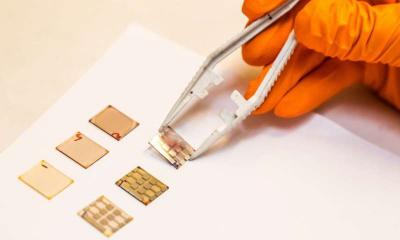 Since solution-processed perovskites contain large amounts of defects, which are mostly halide vacancies, efficient control of the perovskite crystallinity is required for high-performance optoelectronic devices. The research group at LiU, under the leadership of Senior Lecturer Feng Gao, in collaboration with scientists from Nanjing Tech University, and Soochow University in China, has now studied how the precursor components and the interfaces affect the crystallization process of perovskites.

"We and several other groups found that simply introducing an extra amount of organic halides in the precursor can help to passivate the defects and achieve highly emissive perovskite films" says Zhongcheng Yuan, Ph.D. student in Department of Physics, Chemistry and Biology (IFM) at LiU, who is the first author of the article. The excess organic halides, however, hamper the perovskite crystallization, resulting in low-conductivity perovskite emissive layers and poor-performance LEDs.

The scientists have tackled this issue by supporting the perovskite crystallization with a metal oxide, ZnO, which helps to remove a suitable number of the extra organic cations, allowing for better crystallization. The study shows how chemical reactions between different metal oxide layers and perovskite layers affect the properties of the thin films of perovskites, and consequently the performance of LEDs.

"We achieve the precise control by taking advantage of the basic nature of zinc oxide, which can selectively remove the undesired organic cations while leaving the desired halide anions," says Sai Bai, research fellow at the Department of Physics, Chemistry and Biology (IFM) at LiU.

This new discovery has allowed them to fabricate efficient perovskite light-emissive films in the laboratory. The resulting devices give near-infrared LEDs with a quantum efficiency of 19.6%, i.e. 19.6% of the electrons supplied to the device are emitted as light (photons), which is among the best performance for perovskite LEDs in the world.

"Perovskite LEDs are a promising field. Rapid breakthroughs have been witnessed during the past 5 years, but this field is still new and much more work needs to be done before they can be commercially manufactured at a large scale. One critical aspect that needs to be improved is the device stability," says Feng Gao.